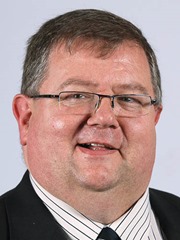 Ross Hussey is the Ulster Unionist MLA for West Tyrone, having been elected to the Assembly in May 2011. He was also a councillor for Omagh Town on Omagh District Council (2005-2013), and stood as an Ulster Conservative and Unionist candidate in the 2010 general election.

Ross is a member of the Public Accounts Committee, the Regional Development Committee and the Northern Ireland Policing Board. He was previously district manager for Pearl Assurance in Omagh (1976-2002) and a part-time RUC officer (1977-2002).

Having been brought up in the 60s, I suppose politics was around me all the time. I clearly remember Rev Paisley on television and I remember him being sent to jail. I also remember being asked to write an essay on politics when I was about 10 at primary school and I commented that when Paisley was in jail they should “throw away the key”.

I have been a member of the Ulster Unionist Party since I was 18 and my family have strong links to the party. I was first elected to Omagh District Council on 5 May 2005 and was re-elected on 5 May 2011, and at that time to the Assembly. My lucky number therefore is going to be five.

What insights have you brought from your policing experience to your political career?

I loved being a part-time police officer. We were in every sense community officers. I was born and brought up in Omagh and we have a very strong sense of place; every family seemed to know each other. I therefore have the advantage of having seen ‘life’ from both sides of the fence and that common sense approach that we had to policing extends to my common sense approach to politics.

In your view, what is unique about West Tyrone?

I think I partially touched on that in my previous answer. It still is a case of everyone knows each other and if we don’t know you we know ‘of’ you. I still smile when I think of the various election campaigns I was involved in and going to doors and someone asking: “Are you related to whoever?” But I was really pleased when someone mentioned my late father and said what a good man he was.

My father died in 1972 when I was 13 and to think that someone still remembered him gave me a great sense of pride. That uniqueness is part of us and I also think, regardless of our political affiliations, we can work together in this county for the good of the county. 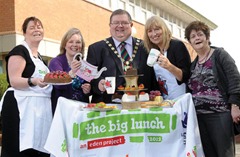 What are your main ambitions for the constituency over this Assembly term?

All politicians want to see their area flourish. I believe we in Tyrone have a great opportunity to turn things round. We have the educational campus proposals for the former Lisanelly Barracks which could create an educational village that could be used as a model for education for years to come.

We have St Lucia Barracks, a beautiful Victorian structure which could be utilised as a headquarters for the new council and home for a regimental museum to highlight the strong military connections of this region.

Although I was not in favour of the proposed A5 dual carriageway, I would have preferred a 2:1 solution (two stretches of dual carriageway and one of single carriageway). I know this is going to go ahead and I want to see Omagh and Strabane opened by this new road to enable business in our area. Finally, I would like to see more government agencies move out of Belfast and we have many sites here in Tyrone that could be suitably adapted.

On welfare reform, what changes do you want to see from government?

Welfare reform will be a nightmare. In fact, the nightmare has already begun. There is not a week that goes by that I am not completing DLA or ESA forms, or arranging appeals against decisions that simply do not make sense. As we move to universal credit and from DLA to PIP (personal independence payment), the paperwork mountain that is going to be created is probably the biggest hurdle that I will have to climb over this political mandate.

I want to see a common sense approach. I believe that exemptions should have been sought for Troubles-related victims and survivors because not only will there be a paper mountain, there will be a mountain of despair as those who suffered horribly have to relive their experiences to justify their award of benefits.

Finally, what are your main interests outside work?

I am a collector – some would say hoarder! Since the age of 13, I have been interested in military badges and with my police background I extended my interest into police badges. Once you are hooked, you cannot escape and I continually scour eBay, antique and collectors’ fairs and ‘junk’ shops for more to add to my collection.