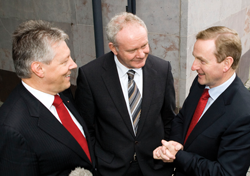 The slow St Andrews Agreement review of the North/South Ministerial Council’s work is starting to see results but major decisions are still on the backburner.

Almost five years after its announcement, the review of the North/South Ministerial Council (NSMC) has partially reported, resulting in only a minor extension to its remit.  Two further parts of the review have been delayed until later this year, including key decisions on whether to set up new North/South bodies.

The review was proposed at St Andrews in October 2006 and launched at the July 2007 North/South Ministerial Council meeting, with three aims:

The St Andrews review has always been caught between the DUP’s refusal to increase North/South co-operation, Sinn Féin’s refusal to roll back on the existing links, and the increasing financial limits of both governments.

DUP ministers have taken part in the work of the NSMC since restoration but the party also dismissed the rationale for the body in an Assembly debate in February 2009.
Academic Andy Pollak has also noticed Sinn Féin sidelining the Council (ultimately an SDLP creation) in favour of its own all-island political campaigns (agendaNi issue 15, pages 98-99).  The SDLP, for its part, has proposed two new all-island structures: an energy regulator and an environmental protection agency.

Ulster Unionists and the Alliance Party accept the Council’s existence, under the Good Friday Agreement, but are sceptical about extra structures.

However, the Council did not meet again until February 2009, due to Sinn Féin’s boycott of the Executive.  At that time, it aimed to make decisions before the end of 2009 but the deadline was consistently put back at subsequent plenary meetings.

Progress picked up after the Assembly election and decisions were made at the plenary meeting on 15 June this year.  However, these only cover the first part of the review i.e. efficiency and value for money.

Ministers agreed three changes:
•    to set up a board for Waterways Ireland;
•    to allow the Loughs Agency to provide services to fishermen;
•    to give the Food Safety Promotion Board a formal role in helping the Food Safety Authority of Ireland and UK Food Standards Agency in emergencies.
Work is also under way to share back office services for Foras na Gaeilge and the Ulster Scots Agency.  Unsuccessful recommendations included:
•    an all-island fund for angling tourism (also for the Loughs Agency);
•    opening a Food Safety Promotion Board office in Northern Ireland and an InterTradeIreland office in Dublin;
•    three-year multi-annual budgets for implementation bodies;
•    a study into overlapping legislation between North and South; and
•    a written process to replace meetings when urgent and pressing matters arise (as existed under direct rule).

The politically sensitive second part of the review (on additional bodies and areas of co-operation) has been put back to the next meeting, on 2 November 2012.  This summit should also consider a report on efficiency savings within the existing implementation bodies and the less contentious third part, on lighthouse management (see box).

Any increase or decrease in the Council’s powers will be politically risky for the DUP or Sinn Féin, respectively.  The status quo is therefore the most likely outcome, with less money to go round the existing bodies.

The two justice ministers already meet annually, under a separate agreement, and nationalists have been keen to bring that under the Council’s remit.

Jim Allister has pointed out that the North/South language body (incorporating Foras na Gaeilge and the Ulster Scots Agency) has not published annual reports for 2008 or any later year.  The 2007 report was published in June 2011, and Culture Minister Carál Ní Chuilín expects the backlog to be cleared up this year.

NSMC supporters point out that it formalises cross-border co-operation, ensures that ministers and officials meet regularly, and can make savings where services are duplicated in border areas.