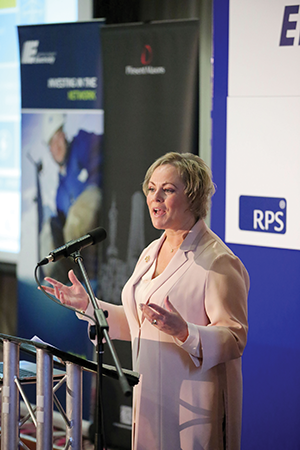 Jenny Pyper, Chief Executive of the Utility Regulator spoke to the Northern Ireland Energy Forum about her priorities and the challenges of regulating a changing energy market.

Speaking at the 2015 Northern Ireland Energy Forum, Pyper reflected upon a wide range of issues the regulator has had to consider in the rapidly changing energy market over the past 12 months.

Reflection was a key theme of her speech as she acknowledged the need for an effective regulator to be able to learn from the past to provide for a better future.

“We accept the importance of our role and hope we can continue to contribute and help steer a steady ship. We do at all times want to be known as a best practice regulator. We want to add value and are very conscious of what has been happening at national level and also in our own experience with the Competition and Markets Authority,” said Pyper.

“We do want to learn lessons. We are able to reflect and we are developing a new paper setting out our approach to price controls. It will set out what we will do and list very clearly the responsibilities and what we expect from our regulated companies and we do, in that paper, put a much greater emphasis on the scope and quality of engagement with regulated utilities.

“In all we do, we try to strike the right balance between the competing parties. We don’t do this in isolation, we value our relationships with government departments, market participants and customer and consumer groups. We try to focus on consumer centric economic regulation and try to balance competing demands. We don’t expect to be loved but we do hope to be respected for the contribution we make.”

Reflecting on the contribution the regulator had made over the past 12 months, Pyper noted that her team had, in the face of many challenges, quite a successful year. “2015 saw the Utility Regulator regulate over £2 billion worth of investment in water and energy utilities. We did reach some key milestones, 300,000 electricity customers have switched supplier since 2010 and 200,000 gas consumers are now connected. We facilitated some significant sustainable energy investment and, of course, contributed to the renewable energy targets.

“Protecting consumers is the number one priority. Our regulation ensures that the price to consumers reflect costs and we have seen a series of tariff reviews in 2015 that have delivered reductions both in electricity and gas. Most recently there has been a five to 10 per cent reduction in gas tariffs announced and that’s been a really good news story. Since 2009 our price controls have saved consumers over £500 million.”

However, despite these successes, Pyper warned that the Utility Regulator cannot afford to rest on its laurels and that big challenges lie ahead for Northern Ireland’s electricity market.

“For all the positives in 2014-2015 I don’t think we can be, and don’t believe we are, complacent at this challenging time for the industry. The Utility Regulator doesn’t operate in a vacuum, we are not immune to policy changes and uncertainties at national or local level and I have expressed my concern previously about potential cost implications of the electricity market reform changes. DETI analysis suggests that the changes that are coming with EMR will add £68 on to the average domestic bill and will have a much bigger impact on larger users.

“There are huge decisions ahead for policy makers. This is difficult territory for the department due to pace of change but I want to urge policy makers to focus on a Northern Ireland solution that doesn’t throw the baby out with the bath water and while also considering an all island solution that could also go hand in hand with Great Britain.

“Just looking at the challenges, I really can’t go past speaking at any public forum without stressing the criticality of the North South Interconnector to Northern Ireland’s security of supply and getting the maximum efficiency out of the current market and the new market. This is the most significant piece of infrastructure investment that we need to secure for Northern Ireland’s future.”

Turning her attention to the impending integrated wholesale market across the island of Ireland, Great Britain and France, Pyper acknowledged that the Integrated Single Electricity Market (I-SEM) is taking up a lot of her team’s time and resources and spoke about what the regulator hopes to achieve from the transition.

“There is a huge amount of regulatory change involved in this transition and whilst the amount of communication with market participants has been good, we totally get that you want more.” said Pyper. “We are trying to drive down costs in key areas of the new market. We are looking to build a wholesale market that is competitive and more liquid.

“Many are unhappy with the work on capacity payments and the fact we are making significant changes to it. We’re trying to drive that down in the new market but also focus on promotion of renewable energy, the potential for wind throughout the network and reduce curtailment. DS3 will make this a much bigger part of the market and will represent a change in market participant’s income streams.

“On capacity payments, we’re not complacent about the current market. The SEM committee has taken action already and has reduced the sum by €60 million. That’s around a 10 per cent decrease so we are still looking to drive out inefficiency and make the SEM competitive but the majority of our focus is on I-SEM.

Looking to the future, Pyper asserted that the two issues of security of supply and affordability go hand in hand and expressed her view that despite an uncertain future, renewable energy still had a key role to play in the Northern Ireland energy market.

“We support consumers and take a long term view. All the work in terms of building a new wholesale market is aimed at putting in place a more competitive, more liquid market aligned to markets in Europe and Europe’s vision of a level playing field. The success that market has in terms of moving down prices will be the test and a crucial part of underpinning the success will be having the interconnector there.

“We support long term action to secure supply and I realise some cost has been passed to the consumer, however, the investment to keep the lights on is one that is an absolute no brainer. To strike a balance between security of affordability is my ultimate aim. It is important to get a market that is fit for purpose and as we look at an uncertain future for renewable energy, I do think it still has a role to play in Northern Ireland.”