Research into the regional impact of the Covid-19 pandemic and its associated shutdowns has shown that Northern Ireland was likely to see “a more severe initial impact”, followed by “a faster recovery than the UK average”.

The hits taken by sectors such as manufacturing (26.6 per cent shrinkage in Q2, 19.1 per cent growth in Q3) in Northern Ireland can perhaps be best gauged through the employment impacts in council areas whose economies are most dependent on manufacturing, such as Derry City and Strabane and Mid Ulster. In terms of percentage of 16-64 population claiming unemployment benefit, Derry City and Strabane has the highest rate of all 11 council areas, 7 per cent as of November 2020. This is a slight decrease on the 7.4 per cent recorded in May 2020, when business contraction was its peak. The May 2020 rate was the highest unemployment rate recorded in the area since February 2015. In February 2020, immediately prior to the outbreak of Covid-19, the area’s rate sat at just 2.9 per cent.

Claimant counts stood at 6.5 per cent overall for November in Northern Ireland, an increase of 0.8 per cent from September. The lowest rates are in Lisburn and Castlereagh (3.6 per cent) and Fermanagh and Omagh (4 per cent). In Lisburn and Castlereagh, the 3.8 per cent recorded in both May and August 2020 is higher than any rate recorded since January 2005; Fermanagh and Omagh’s 4.5 per cent rate in May 2020 was its highest since April 2014. The 5 per cent recorded in Ards and North Down in May was also its highest rate recorded post-January 2005. Armagh City, Banbridge and Craigavon’s May 2020 rate of 4.7 per cent had not been since August 2013.

The regional effect of Covid-19 can be further interrogated when the redundancy data by council area is examined. In the first two months of 2020, 80 redundancies were confirmed, 60 in Belfast in January and 20 in Causeway Coast and Glens in February. In March alone, that 80 was tripled to 240 (10 in Ards and North Down, 190 in Belfast, 10 in Derry City and Strabane and 20 in Lisburn and Castlereagh). After the total monthly number of redundancies fell again for April, May and June, numbers have begun rising since July. October is the worst month of 2020 for which data is available, with a total of 1,240 confirmed redundancies. 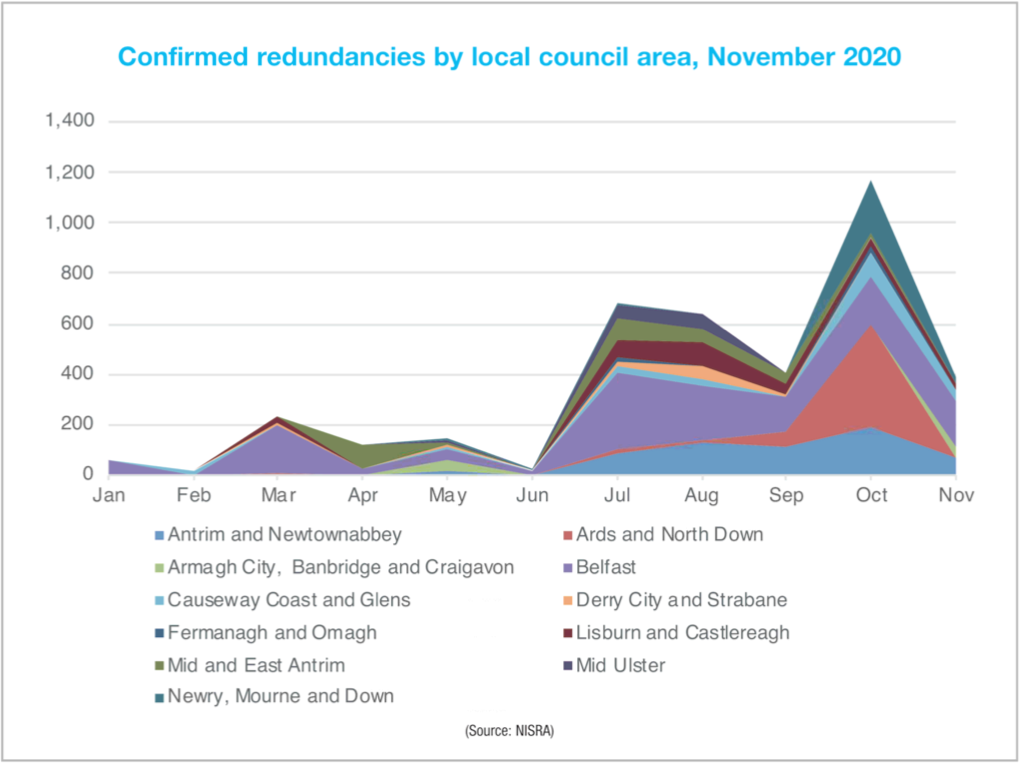 For the year up to November, a total of 4,450 redundancies have been confirmed with 10,720 proposed. The NI Chamber of Commerce Quarterly Economic Survey and Covid-19 Business Impact Tracker report found that 36 per cent of local, smaller firms have closed their operations temporarily during the pandemic and that 38 per cent have had a “significant decrease” in their workforce, signalling the gargantuan work that will be required to return the local economies of Northern Ireland to their pre-pandemic footing.