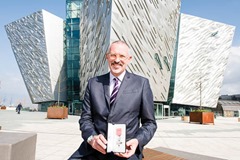 The regeneration of Belfast’s Titanic Quarter and the wider city has been formally recognised in the award of an MBE to Titanic Belfast Chief Executive Tim Husbands. The MBE is awarded for a significant achievement or outstanding service to a particular community and Husbands was “deeply humbled” to receive the honour from the Queen.

The Nottingham-born recipient, who describes himself as an “honorary Belfast man”, accepted the MBE at Buckingham Palace after he was named in the 2014 new year honour list for services to economic development and tourism.

The award was presented almost two years after Husbands first met Queen Elizabeth and Prince Philip, when they marked the official opening of Titanic Belfast, the world’s largest Titanic visitor experience which stands where RMS Titanic was built more than 100 years ago.

“The day I met Her Majesty The Queen and Prince Philip was a hugely proud day for all of us who had worked on the project. It was a real privilege to be able to spend some time with her as her guide.”

Tim Husbands has played a significant role in the transformation of Belfast as a confident, vibrant destination of choice for leisure and business tourists.

A former Managing Director of Belfast’s Waterfront Hall and the Ulster Hall, he became Head of City Events and Venues in 2009 and during this tenure helped secure the memorable 2009 Tall Ships Festival and the MTV Music Awards in 2011.

Before his career took him across the Irish Sea, Husbands served as Managing Director of Riviera Centre in Torquay, a major UK conference centre and leisure facility.

As Titanic Belfast celebrated its second birthday on 31 March, exceeding all visitor, and conference and banqueting targets, the Nottingham Forest supporter is confident that his adopted city is on course to reap more rewards.

Having played a vital role in Titanic Belfast’s hosting of the Giro d’Italia race in May, Husbands is now looking forward to seeing the visitor attraction host more events that will continue Belfast’s development.

He added: “Belfast is looking forward, so too is Northern Ireland. Our door is open for tourists and business, and our conference and hospitality sectors have never been more confident. I am proud to have been associated with Belfast throughout challenging times and now in these rewarding times.

“We will certainly not be standing still. We have already begun a new investment period which will see enhanced changes to the interactive gallery experience for the benefit of visitors. This ongoing programme of investment launched with the opening of a new Ocean Exploration Centre in Titanic Belfast, which offers visitors and educators a great opportunity to explore the oceans and shores around us.

“Titanic Belfast has also invested recently in the new surface laid beside the building and Titanic Slipways, which played host to the Giro d’Italia team paddock. As a result, we are confident now that this space will see other major outdoor events and concerts taking place in Titanic Quarter.

Husbands concluded: “In the context of the recent Giro Big Start event, we will understandably benefit from the global TV and media exposure it received and from the supportive word-of-mouth marketing; its legacy will see new audiences exposed to Titanic Belfast and Northern Ireland in general, in both the immediate and long-term future.”