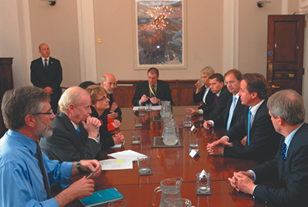 Public expenditure in Northern Ireland has almost doubled in money terms over the past decade but over the next four years the region faces drastic cuts in public services. Victor Hewitt considers the causes and consequences, along with possible fiscal options. A deal with the UK Government would offer some relief from the worst of the cuts and help turn Northern Ireland into an enterprise zone.

The combination of an underlying structural deficit plus the impact of actions to alleviate the financial crisis and the recession has brought about a serious deterioration in the UK’s fiscal position. By the spring of this year annual net UK public sector borrowing (the deficit) was projected to exceed 11 per cent of gross domestic product (GDP) while the underlying stock of debt was rising sharply towards a peak of almost 75 per cent of GDP or £1.4 trillion in 2014-2015.

The cost of servicing this debt would grow very rapidly if interest rates began to increase or the markets imposed a risk premium on UK borrowing. Faced with these threats a credible debt consolidation plan for the UK was needed urgently.

Of the £128 billion of consolidation planned for 2015-2016, some £99 billion is expected to come from spending cuts and the rest from tax increases. The spending cuts include £11 billion of a contribution from the welfare budget.

Since the Coalition has pledged to maintain real spending on health and increase spending on overseas aid, the overall spending cuts imply real reductions of 25 per cent or more for other services.

With health protected, this implies cuts of between 8-10 per cent in real terms for current expenditure in Northern Ireland by 2014-2015 and probably 25 per cent or more in capital expenditure. Thus by 2014-2015 the baseline for the public expenditure funded by the UK Exchequer and assigned to the Northern Ireland Executive (the so called assigned DEL)* could be down by £1.5 billion compared with its current figure**.

* DEL = departmental expenditure limit
** This is entirely consistent with estimates of a cut of £4.8 billion for Scottish public expenditure made by the Scottish Government over the same period.

The assigned DEL is over 90 per cent of the Executive’s budget but there are other sources of income. Table 2 sets out what the Executive plans to spend in 2010- 2011 and how it is financed.

It is clear that losing over £1 billion of departmental spending would be a huge challenge for the Executive but unfortunately the pain doesn’t end there. In its short life the present Executive has managed to rack up some substantial bills for which there is no regular source of finance.

Some of these, such as free transport for the elderly and free prescriptions, have a modest though growing cost. Others, such as expenditure on water and sewerage (about £200 million per year), and freezing the regional rates have a much higher price tag.

Other commitments such as the Civil Service equal pay claim (£150 million) and possible support for the Presbyterian Mutual savers also represent an unfunded claim on resources. Taken alongside a decline in capital receipts from a depressed market these and other pressures forced a £367 million readjustment in 2010-2011 and the initial emergency UK in-year budget adjustment of £6 billion left the Executive with a further £128 million of cuts to find now or defer until next year.

Finally we should not overlook the budget significance of the transfer of policing and justice powers to the Executive. Although a baseline of £1.2 billion and a one-off package worth some £850 million transferred with this function it too will face cuts from the consolidation announced in the June 2010 emergency Budget. Past experience shows that any deterioration in the security situation tends to push law and order spending towards the top of the priority list, displacing other programmes in the process.

What can be done?

Facing cuts in the Executive’s budget which may take a decade or more to recover to its present level requires an urgent examination of what can be done to offset this loss. This section looks briefly at the options for self-help, some obvious and others more radical.

(a) Ending protection for spending

Every Minister will wish to have their expenditure protected in times of cut backs but there is no logical justification for blanket protection. All programmes have the potential to make savings and no area of spending should be immune from scrutiny. The local budget is dominated by health and education spending and it is simply not possible to absorb cuts of the magnitude envisaged while protecting these large programmes.

If the Executive is paying for measures that have no support through the Barnett formula then these should be examined urgently since the true cost is lower levels of service in other areas. Finding an alternative funding mechanism for the Water Service rather relying on public expenditure, for example, would release up to £200 million per year for other services.

There has been a growing trend to provide some services on a universal basis and at no user cost. Prescriptions are one example. This form of provision is wasteful and needs to be re-thought.

Efficiency savings can make limited resources go further. However, having already found over £700 million of savings in the past three years there must be no illusion that efficiency savings alone can come near to closing the funding gap that now looms.

Public sector pay counts directly for half of public expenditure and much of the rest indirectly supports jobs so pay restraint is a legitimate issue for debate when the alternative is large scale loss of jobs.

Public sector pay in areas of devolved responsibility rests with the Executive but within the controls set by HM Treasury so in principle a policy of freezing or even cutting pay (as has happened in the Republic of Ireland) is possible.

However, this is a complex area and the scope for local action may be constrained by legal commitments. Adopting regional pay bargaining would mean disengaging from the national pay bodies and setting up new arrangements. It is by no means a quick fix for tackling the public expenditure crisis.

Northern Ireland has a complex mix of administrative structures that are in urgent need of rationalisation to reduce duplication and waste. Unfortunately the main vehicles for delivering these changes such as the Review of Public Administration and the Education and Skills Authority have stalled because of political differences.

The prize is still there, however, including new rationalisations such as concentrating public sector research organisations that are scattered across departments into a new unified structure. In the face of a major public expenditure crisis it makes sense to re-start the process of rationalisation as soon as possible.

Northern Ireland has embarked upon an ambitious investment strategy with a planned spend of £18 billion over ten years. However, this strategy was always conditional on funding being available and the depressed state of the market for asset sales and the very large reduction in conventional capital funds over the next four years means that the original strategy is unsustainable.

In addition, Northern Ireland has been a heavy user of the Private Finance Initiative (PFI) to deliver capital projects. In 2010-2011, over £940 million worth of deals had either been signed or were at preferred bidder stage. This is 11 per cent of the UK total for a region with 3 per cent of the UK population. Since the annual unitary payments on all of these deals come out of current expenditure which is set to contract sharply, PFI will become an increasingly onerous burden.

In view of the change in circumstances since it was originally conceived, a review of the Investment Strategy is clearly indicated with a view to adopting a more modest and sustainable programme.

The principal revenue raising vehicle available to the Executive is the regional rate. However, the domestic rate has been frozen in money terms for three years so revenue from that source is not even keeping pace with inflation. The non-domestic rate has been frozen in real terms and a raft of reliefs or giveaways have undermined the tax base. As public services face unprecedented pressures, all of these revenue limiting measures will come under critical scrutiny.

Beyond the rates the Executive has little room to manoeuvre in generating additional revenue. Some imaginative ideas involving manipulating the MoT system and imposing a text levy on mobile phone operators have been floated but they need much further thought before any revenue would be forthcoming.

It is difficult not to conclude from this brief review that the Executive has relatively few means in the short term to offset the pain of cuts in its budget. Perhaps it is time to consider if there is another way to tackle the problem through a deal with the Coalition Government.

Can a deal be done?

A straightforward plea to be excused the forthcoming cuts will be most unlikely to succeed. There are many areas of the UK that are as poor if not poorer than Northern Ireland so we are not in that sense a unique case.

However, there are two factors that might be woven into a compelling argument for distinct treatment. The first of these is the weakness of the private sector. While the region will take a 3 per cent population share of cuts the local private sector accounts for probably less than 2 per cent of UK output, which is well down the regional scale. Thus the ability of the private sector to expand rapidly to take up the slack from public sector cuts is very problematic unless it gets a helping hand.

This is where the second part of the argument comes in. Both the Secretary of State and the Prime Minister have declared that they wish to see Northern Ireland turn into an ‘enterprise zone’ but so far no tangible ideas beyond the possibility of a reduced rate of corporation tax have emerged to give effect to this desire.

The outline of a deal might therefore be as follows:

Victor Hewitt is Director of the Economic Research Institute of Northern Ireland.