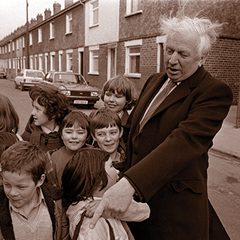 Secretary of State Jim Prior attempted to restore devolution by setting up an Assembly with limited powers in 1982. Peter Cheney reviews the archives and considers its performance.

Although ultimately unsuccessful, the ‘Prior Assembly’ of the mid-1980s proved that local parties could work together to scrutinise and discuss government policy. The Public Records Office files for 1982 cast new light on the history of this constitutional experiment.

Secretary of State James Prior, appointed in September 1981, felt a duty to re-integrate the Catholic community into the political system. His white paper, published on 2 April 1982, proposed ‘rolling devolution’.

A 78-member Assembly would be elected using the 1973 model and would have an advisory and consultative role until a power-sharing agreement could be reached. Powers would then be devolved, one department at a time.

Margaret Thatcher initially thought that the chances of a settlement were too remote. However, the Cabinet wanted to make some attempt at a settlement. Mrs Thatcher conceded but ruled out further cross-border co-operation as relations with Taoiseach Charles Haughey were already tense.

Prior told the Commons that he would give the local parties “all the advantages of political activity with none of the disadvantages of responsibility.” The resulting Northern Ireland Act became law on 23 July but its backers were only mildly optimistic. Elections took place on  20 October.

The Alliance Party was Prior’s strongest local supporter. The UUP was mainly divided between those seeking full integration with Britain and supporters of pre-1972 devolution. Dermot Nesbitt and other liberal Ulster Unionists favoured power-sharing but were a small minority at this stage. The DUP opposed power-sharing but was strongly pro-devolution.

John Hume was prepared to take the SDLP into the first meeting and protest against the unionist parties. His party, though, was under pressure from Sinn Féin to boycott the election itself. The SDLP decided to run candidates but not take seats; Sinn Féin then decided to contest the poll as well.

No nationalists participated in the Assembly and the failure to win cross-community support undermined it from the start. Each of the six Northern Ireland Civil Service departments was shadowed by an Assembly committee: Agriculture; Economic Development; Education; Environment; Finance and Personnel; and Health and Social Services.

A total of 118 committee reports were published over the next four years. “The best thing was committees and trying to work together and seeing what they could produce from that,” former academic Sydney Elliott told agendaNi. Specialised committees were “flavour of the month in terms of parliamentary reform” as they were also relatively new at Westminster.

Jim Prior resigned as Secretary of State in September 1984. Frustrated by slow progress, the UK and Irish governments signed the Anglo-Irish Agreement in November 1985.

Unionists used the Assembly as a platform to protest against the deal. Then Secretary of State Tom King concluded that the Assembly was no longer ‘fit for purpose’ and brought forward a dissolution order, signed by the Queen on 23 June 1986. Business concluded at 2am on 24 June. The DUP members stayed on in protest until they were removed by the RUC.

The DUP and UUP representatives ignored the dissolution order and continued to meet in Belfast City Hall. This unofficial Assembly was powerless and eventually wound itself up in November 1986.

Where are they now?

“The first meeting of the Assembly will be fully reported in the press but you may like a more impressionistic account,” wrote DES Blatherwick of the NIO’s Political Affairs Division in a note addressed to Prior.

That session took place on 11 November 1982, therefore coinciding with Remembrance Day. It “opened with a minute’s silence in remembrance of the dead of the 2 world wars and the Northern Ireland troubles, proposed by Mr Molyneaux.” The members then moved to elect the Presiding Officer (Speaker) with the DUP and Alliance Party proposing Ulster Popular Unionist Jim Kilfedder.

“It rapidly became clear that the UUP had met an hour or so before the session began and had decided to put up John Carson at the last minute,” he added.

Kilfedder won by 31 votes to 25. He then “called for a truce between the parties [and] referred to his hope that the SDLP would take their seats.” Jim Molyneaux promised his party’s support for Kilfedder “though in a slightly grudging fashion.” Ian Paisley explained that the DUP would give the Assembly priority over Westminster.

John Carson was a moderate unionist from North Belfast. Afterwards, he informed Blatherwick that he had “always been willing to stand” for the speakership but had held back as Rev Martin Smyth was the UUP’s nominee. That afternoon, he came “under great pressure to let his name go forward and had done so with reluctance” as he knew he would lose the vote.

The atmosphere on the day was “fairly relaxed” but the DUP “clearly enjoyed the UUP’s discomfiture.” The Ulster Unionists “did their best to look like a unified party, though there were obvious cracks in the facade.”

Blatherwick found Molyneaux’s tactics hard to understand: “Not only has he allowed the job of Speaker to go to another party, he has brought the DUP and Alliance tactically together and he must have increased dissension within his ranks.” Blatherwick concluded that the UUP leader “wanted the Assembly to start off with an argument and a Speaker who has the reputation of being a second choice.”