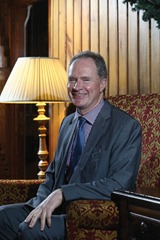 Owen Brennan, Chairman of agri-technology firm Devenish Nutrition, has highlighted the economic importance of the agriculture and food sectors.

Devenish Nutrition Chairman Owen Brennan painted a bright picture regarding the future prospects for agri-food in Northern Ireland, courtesy of his speech to the agendaNi seminar.

“Both sectors combined generate an annual turnover in the region of £4 billion and employ over 100,000 people,” he said. “What’s more they rightly enjoy the ear of government at the present time and we must build on this for the future.”

“The coming weeks will, hopefully, see the Executive acting on the report from the Agri-Food Strategy Board. I firmly believe that the recommendations emanating from this document will have a major impact on the future of the agri-food industry as whole.

“The fortunes of every business making up the farming and food chain are inextricably linked,” he further explained. “Our industry must continuously strive to produce what the market wants rather than find a market for what we can produce. And it is the development of this crucially important mindset that I know will be encouraged by the work of the [Agri-food] Strategy Board.”

Owen Brennan went on to highlight the need for the agri-food sectors to become more carbon-efficient in the way they go about their business.

“This will be an increasingly important consideration for those purchasing our food,” he stressed. “We want a position of international best practice for the produce of Northern Ireland in this regard.”

Owen Brennan went on to confirm that agri-food in Northern Ireland may well be on the cusp of a golden era: “Given the nature of international business at the present time, local agri-food companies must seek to invest appropriately for the future because it is only by taking this approach that the undoubted potential growth can be fully realised.

“Pushing forward efficiency levels both on farm and at food processing levels are the key drivers for the future. There is no other show in town.”

Brennan then went on to highlight the success of the pig and poultry sectors in Northern Ireland, citing them both as role models for the rest of the industry to follow.

“Investing in our young people will also be critically important as the various agri-food sectors build for the future,” Brennan explained. There is a tremendous pool of young talent available to both industries. However, it is important that young people are made fully aware of the tremendous career opportunities to be availed of within farming and food over the coming years. What’s more, they need to be trained properly so as to allow them to grasp the opportunities that undoubtedly lie ahead.

Owen Brennan went on to make the point that politicians at Stormont also have a key role to play so as to ensure the future growth of farming and food in Northern Ireland.

“The ‘Going for Growth’ document is currently with the Executive. Its recommendations constitute a blueprint for the future development of the farming and food industries. Individual companies need access to the capital which will allow them develop their businesses on a sustainable footing. The Executive has a key role to play in making this happen.”

He concluded: “Our politicians can also play their part in helping to open up new markets for local food companies. A lot of work in this regard has already taken place. However, it must be built on for the future. In countries such as China, good working relations go hand in hand with good business p