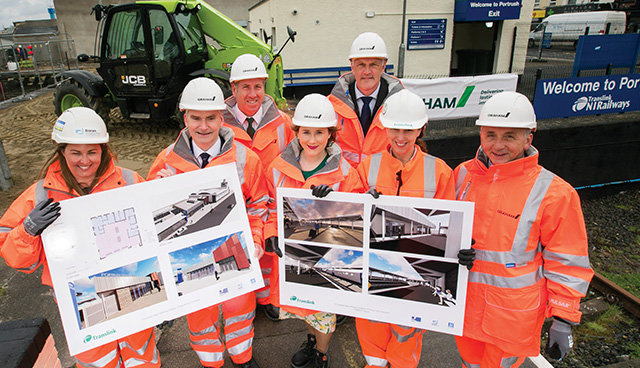 Work is now underway on a new, modern train station for Portrush, which is designed to attract and enable future growth in rail passengers travelling to and from the seaside resort. The scheme is worth approximately £5.6 million, with funding from the Department for Communities (£4.7 million) and the Department for Infrastructure (£900K+).

The project is part of the wider £17 million Portrush Regeneration Programme, led by the Department for Communities, which includes major public realm works. This will complete in spring 2019 ahead of the 148th Open, due to be hosted in the town next July.

The regeneration of station and town centre offers a great opportunity to sustainably develop the economy of Portrush and the wider North Coast in order to generate increased visitor numbers, spend and investment.

The new facility will allow for further passenger growth at Portrush station, with over 620,000 journeys per year currently being made to and from the existing station, as well as contributing to the regeneration of the town centre and appropriately reflecting Portrush’s status as a premier resort.

Key benefits of the project include:

Marking the sod cutting, Chris Conway, Translink Group Chief Executive, says: ‘‘We’re delighted to to get this exciting project under way. The new facility will provide modern passenger facilities to cater for the growing passenger numbers and will play a key role in the transport plans for the 148th Open next year. We are transforming public transport in Northern Ireland, and this new, fully accessible station will offer modern waiting facilities, improved passenger information and signage to local amenities and attractions as well as enhanced cycle storage to encourage active travel and ‘greener’ tourism links.”

William Cameron from the Department for Communities adds: ‘‘The Department is delighted that work is underway to deliver a new, modern train station with much improved facilities for Portrush. The new station will not only serve the increasing visitor numbers but will also help regenerate the area around one of the main gateways into the town.

‘‘The station is one of the projects in the £17 million Executive-endorsed Portrush Regeneration Programme that will help position the area to maximise the economic return that the 148th Open and its legacy will present. The Department is grateful to Translink for their commitment to this project, and I look forward to seeing the exciting plans becoming a reality over the coming months.’’

With more than 81 million passenger journeys recorded by Translink last year, it’s clear that more and more people are choosing public transport as their preferred means of travel – these figures, the highest for twenty years, point to the continuing success of Translink’s ambitious plans to be Your First Choice for Travel in Northern Ireland.