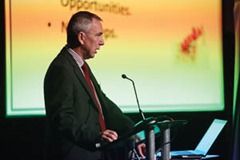 An entirely new planning system will commence on 1 April, according to Antrim Borough Council Chief Executive David McCammick. McCammick chairs the Society of Local Authority Chief Executives (SOLACE) planning sub-group and views the reform process as “right-sizing” i.e. making sure that new services were fit-for-purpose and rates-neutral at the point of transfer.

He acknowledges the scale of change in planning in recent years i.e. a reduction in the number of central government planners from 700 to 400 since 2008, the decrease in applications from 27,000 to 12,000 in the same timeframe, and the halving of planning budget from £32 million to £16 million since 2011.

Organisationally, the planning system will move from six sub-regional offices and a headquarters (6+1) to offices in each council area plus the headquarters (11+1).

The governance architecture was initially “cumbersome”. He elaborates: “When central government operates, it has sometimes got the facility to work through a department as the case may be. Local government, of course, continues to be 26 separate organisations and there’s no one entity that can make a decision.”

Organisational structures are now starting to emerge but the timeframe has been compressed due to the long political processes involved. “We’ve known for a long time that this was going to happen but so much seemed to have been left to the final period,” he candidly remarks. “It’s a really hectic working period both in terms of the work that needs to be done and even the legislation and guidance notes that have to be produced.”

The new councils do not yet have shadow planning departments in place and are relying heavily on the goodwill of staff transferring into local government.

“It’s not just about planning,” he adds. “You’re talking about creating new organisations. They have to put their structures and policies and basic systems in place. They’re legal entities. They’re dealing with public money. So it’s quite a substantial challenge to create these new organisations from two, three or four councils going forward.”

Many councils need to update the area plans for their districts and all of them would also need to consider how these align with the Regional Development Strategy. Drawing up new area plans will be “a real opportunity to develop the political class as they’re going to have to deal with real world issues with real world consequences if they don’t do it properly and professionally.”

The contract for the planning portal has been extended to 2019 and the sector will therefore spend most of the next four years preparing for the new portal. The DoE, in his view, will need to be an honest broker with a moderating influence on the costs of the new system. McCammick’s preference is to focus on common processes and economies of scale. He foresees shared services where one council takes the lead and provides a service on behalf of the others.

In the short term, the momentum behind project management needs to continue. He encourages stakeholders to familiarise themselves with the new governance arrangements and cultivate professional working relationships. He is also confident that, regardless of the difficulties, local government would deliver on reform.