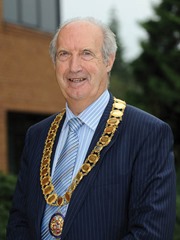 NILGA President Arnold Hatch discusses the difference that community planning will make with Peter Cheney and points to the European opportunities for local government.

As the final stages of the local government reform process get under way, Arnold Hatch is confident that it will deliver tangible improvements for residents across the region. The UUP councillor from Craigavon is the current President of the Northern Ireland Local Government Association (NILGA).

“It provides significant opportunities for future investment across Northern Ireland,” Hatch comments. “We think that community planning will provide a synergy where ‘two and two will make five’.” This is about delivering the bigger picture at a local level.

The relatively large size of the 11 councils will give them a stronger base from which to operate. Until now, Belfast has had several advantages over the other councils with its capital status and strong rate base. In the new arrangements, Armagh, Banbridge and Craigavon will have the second largest population and will have the advantages of Craigavon’s industrial base, Armagh’s status as the ecclesiastical capital of Ireland and a strong retail base in Banbridge.

The new councils will make a significant difference to each area with a combined annual budget of around £1 billion, assets worth a further £1 billion, and over 11,000 employees.

A new inward investor will need roads, water and electricity infrastructure to be put in place before setting up a factory. Community planning will involve all the relevant agencies and service providers from an early stage; the electricity supplier will know which industries are coming into the area and where to upgrade the grid.

“It also may have an impact on schools and hospitals,” he adds. The Health Service and the education services can be informed about what is happening and the potential consequences for them.

“Community planning won’t happen overnight but the whole purpose of it is to align budgets,” Hatch remarks. Capital expenditure will be “planned for well in advance” so that service providers can avoid budget shortfalls. Investment should therefore become better and “more strategic.”

The general power of competence will allow councils “to do things that nobody else is doing.” He adds: “There’s always the caveat – ‘provided we have the money to do it’ – but with the stronger rates base, we may have more flexibility in doing that. We will have more fundraising powers.”

Asked to give a potential example, Hatch suggests that if a new investor expressed an interest in a site, the council could link that investment with the Southern Regional College, to provide the right skills for the workforce.

A council could also undertake infrastructure work to help a new investor if the council can deliver it more quickly than the Department for Regional Development and have the required budget.

Northern Ireland may not be as successful as the Republic in drawing down EU funds but it is still a major beneficiary from Europe. For example, it will receive €1 billion in Structural Funds over the next funding round (2014-2020), which compares well with the €1.3 billion received between 2007 and 2013.

“It’s almost as good as it was before but we need to do better,” Hatch remarks. 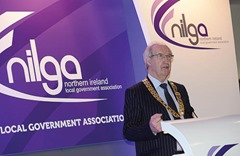 NILGA has proposed a regional contact for councils – a funding strategist – who can direct councils to European funding sources: “There are a lot of small funds in Brussels that we don’t know about and individual officers in councils don’t have time to chase up.”

A funding expert would be able to quickly direct councils to the relevant sources. He expects that each council would be prepared to contribute towards the post i.e. one eleventh of the salary per council.

Many projects “wouldn’t get off the ground” without Peace III and Interreg funding. Hatch points to Translink’s redevelopment of Portadown railway station as one example. Councils can draw down this funding “on a better and stronger basis” if they work together and he sees “a lot to strive for” over the next six years.

Northern Ireland has been allocated:

• €308 million from the European Regional Development Fund; and

NILGA has to set up a cross-party working group with the aim of maximising Northern Ireland’s uptake of EU funds. The group also undertakes strategic initiatives, co-ordinated information and investment priorities for all councils, and has completed a ‘pipeline exercise’ to ensure that councils’ capital investment priorities are at the fore when Structural Funds are being planned.

NILGA contributed to the Northern Ireland chapter of the UK Partnership Agreement to ensure that local authorities had more power to take decisions on European funding. This was adopted in England, Scotland and Wales but the Northern Ireland Civil Service is still determining its use here, and government departments still take major decisions here. NILGA challenged that thinking and the chapter has now been implemented.

Hatch is a member of the EU’s Committee of the Regions and takes a close interest in European policy.

NILGA participates in local government’s involvement in strategic events such as the Open Days week in Brussels each October. It also submitted Northern Ireland’s bid to become a European Entrepreneurial Region for 2015. The awards will be made in late June and are sponsored by the Committee of the Regions.

On a similar note, Hatch is “passionate” about the European Charter of Local Self-Government and fails to understand why the UK Government has not included Northern Ireland in its remit.

The charter guarantees the political and financial independence of local authorities. It was published by the Council of Europe in 1985 and has covered English, Scottish and Welsh councils since 1998.

Northern Ireland was exempted because of the difficult political situation at that time but the supervising body – the European Committee on Democracy and Governance – now sees “no excuse” for the exemption.

In his view, the Assembly is reluctant to give councils more responsibilities and rights but councils already have most of those rights. NILGA sees the charter as the best way of recognising councils’ rights.

“The charter actually fits with the principles of the draft Programme for Local Government 2014-24,” Hatch explains, pointing to NILGA’s foundation document for the new councils. “It offers the opportunity for local government to become a central building block to energise communities and local economies, in partnership with the Executive, and to mitigate against the worst impacts of imposed budget cuts. So there are a lot of benefits to Northern Ireland if we sign up to it.”

The European Charter of Local Self-Government is available at www.conventions.coe.int