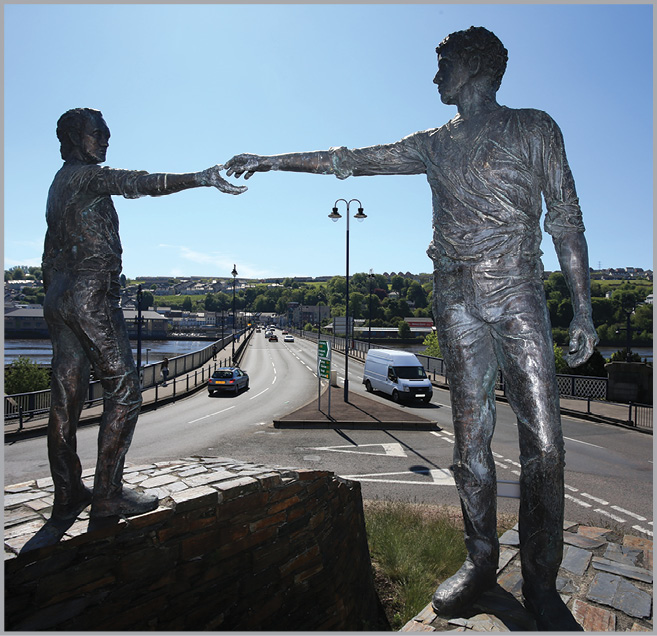 A new strategic partnership incorporating both Derry City and Strabane District Council (DCSDC) and Donegal County Council (DCC) held its inaugural meeting in early December 2016. The cross-border North West Strategic Growth Partnership is the first group of its kind on the island.

It is intended that the new partnership will ensure joined-up planning between the two council jurisdictions in the North West. It will also operate in a support capacity to compliment the work of the North West regional Development Group. The group has been endorsed by both governments through the North South Ministerial Council and its formation represents the conclusion of a two year planning and development process.

A joint presentation was delivered by the Department for Infrastructure and the Irish Department of Housing, Planning, Community and Local Government to outline their commitment to improving infrastructural connectivity in the region on a collaborative basis. A sum of €14.86 million is being allocated to a greenway project which will provide three new corridors, totalling 46.5km between DCSDC and DCC. These routes include:

Funding for the cross-border initiative was awarded by the Special EU Programmes Body (SEUPB) through the INTERREG IVA Programme.

At the same time, support is being provided by the International Centre for Local and Regional Development (ICLRD) which facilitated a roundtable discussion to summarise departmental priorities for 2017/18 and detail the implications for the North West region.

The initial meeting was attended by the two council chief executives, the Mayor of DCSDC, An Cathaoirleach of DCC, both the Chair and Co-Chair of the North West Regional development group, as well as representatives from across all government departments both north and south.

DCSDC Chief Executive John Kelpie observed: “We are delighted at the success of the inaugural meeting and the genuine enthusiasm and commitment from the government departments to assist us in achieving our strategic goals.” He added: “It is important for us to showcase the North West region and promote the fact that it includes Derry, the fourth largest city region on the island of Ireland and the huge potential we have for growth.”

Similarly, DCC Chief Executive Seamus Neely commented: “It was a very unique opportunity for us to give the Partnership members an insight into the positive work we are doing collectively in delivering a joint programme that will focus on job creation, growth and investment as well as in tourism, rural connectivity and health.

“The partnership grouping were all very committed to doing what they can to help us put into place specific arrangements that will allow the North West city region to maximise the opportunities that exist.”

As well as facilitating an enhanced level of cooperation between the central and local governments, it is envisioned that the new body will be pivotal as a forum for outlining the key strengths required to achieve a vision of the North West as a resilient and prosperous region. The partnership is expected to meet with key regional stakeholders on a biannual basis, with the next meeting anticipated for late spring in 2017.