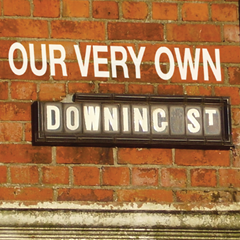 When all eyes fell on Downing Street on the morning of 7 May, little probably stirred on the quiet, scruffy and humble Belfast thoroughfare which shares its famous name. Downing Street, a side-street off the Shankill Road, is as far removed as is possible from its London namesake.

It lies just before the junction of Northumberland Street and Agnes Street, which marked the outskirts of Belfast town around 1870. Like its Lower Shankill neighbours, it was once lined by back-to-back terraces but now boasts no front doors, whether from houses or shops. Presumably cleared by the Belfast blitz or the urban renewal phase of the 1970s, this place has seen better days. The street effectively serves as a drive-way up to a car park for a local women’s centre.

A map of 1901 shows a dozen houses cramped alongside its left hand side so a non-descript red-bricked 10 Downing Street can be imagined. A docker could have called it home, his wife spending long hours in the mill while coming home to a family of three or four, soon to find a job themselves.

At the Shankill end, two empty shops stand at the junction. B McCann’s gent’s hairdressers has ‘closed moved across the road to Phils’. Another business behind it ‘moved to Browns Square Melbourne car park’. Estate agents MacFarlane and Smyth offer to let the ground and first floor of its opposite number.

The passerby will be drawn to the sight of the Titanic passing Harland and Wolff on its way down to Belfast Lough, complete with Cave Hill and the Giant’s Causeway. This mural replaces the coat of arms and masked men of C Company, the UDA branch which once held sway. At the same point in the London street, a Met checkpoint would sit behind imposing black gates which guard Number 10.

Further down, the right side of Downing Street opens up into a small patch of greenery (pictured). The unnamed park’s white cherry trees look tranquil on a bright spring evening as two middle-aged women walk by, chatting loudly on their way home from work. 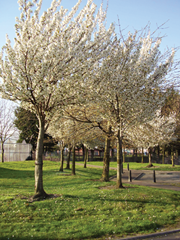 You can cross over to Craven Street, where the St Michael’s Parish Church stands out in the absence of any neighbours. The building dates from 1898 but a poster declares the church, as a group of people, has been meeting on the spot since 1893 and welcomes newcomers.

It’s perhaps worth asking why the street is so little known. The answer lies in its emptiness, as no-one now claims to “live on Downing Street” and maybe modesty in the people who walk down or park their car on it.

There are painful memories too, which cast a dark shadow here. Six men, four Protestant and two Catholic, met their deaths on the street or in its vicinity between October 1969 and January 1977. Loyalists killed five and the British army one.

In this most British part of Belfast, there’s no doubt about how any Downing Street residents would see themselves. Five minutes down an increasingly deserted Northumberland Street, though, takes you to the polar opposite with the murals of the Falls backing republican prisoners and praising ‘anti-imperialist’ struggles. The same journey from London’s street would take the visitor to Parliament Square, centre of the British establishment.

Those living in Downing Street SW1A are very much at the heart of power, while uninhabited Downing Street BT13 sits at its furthest margins in one of the UK’s poorest neighbourhoods. And while the Shankill surely protested at the ballot box, Gerry Adams is again MP for West Belfast and therefore Downing Street too.