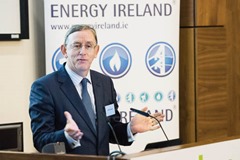 Industry analyst Peter Hughes has outlined the potential for lower oil prices at an Energy Ireland seminar but also warned that European energy policy was damaging the continent’s competitiveness.

“Change is the only constant in the energy business and in life in general,” Peter Hughes remarked when addressing an Energy Ireland seminar on the prospects for oil and gas. “Change, in recent years, has become even more rapid and even more radical – and it’s having a fundamental effect on our business.”

A “holy trinity” of technologies – drilling, completion (e.g. fracking) and seismic – has transformed those supply outlooks. Petroleum deposits can now be reached in the pre-salt layer of continental shelf off Brazil and West Africa.

“There are no perceived supply constraints foreseeable,” Hughes said of oil but demand was under pressure from three considerable forces: security of supply; the environment; and the “extreme political undesirability” of price volatility.

“Rather counter-intuitively,” Hughes commented, “the shale gas revolution has in the short term reinforced those differences because it has, of course, forced down the price of gas in the USA but hasn’t done elsewhere.”

At present, gas cannot be termed as a normal commodity market because its price is indexed to oil, another commodity. In Europe, every major contract is being negotiated with a view to moving away from that indexing. In Asia, oil indexation is causing the high price of imported liquefied natural gas. “Basically, they don’t want to pay that anymore,” Hughes added, and LNG exports from the USA will be the catalyst for change.

“The gas demand picture in Europe has been pretty much a disaster for the last few years,” Hughes warned. European demand went down by 10-11 per cent over 2011 and by a further 3-4 per cent in 2012: “This year, it will be up again because we had a cold winter but structurally, gas demand in Europe is under extreme pressure.” The growth of American shale gas has displaced coal into the international market and forced down the price. Much of that coal has been imported into Europe for power generation.

“All the coal-fired capacity in Europe is now ‘maxing out’ at the expense of gas,” he commented. CO2 emissions in Germany are now rising fast despite its massive investment in policies to reduce emissions over time.

As explained, inflated gas prices in Asia “are likely to come under pressure” and the price will gradually start to reflect the long-run marginal cost of supply: $10-12 per barrel.

Since the signing of major gas contracts with Russian produced, the balance has “completely shifted away from the interests of the buyer and towards the interests of the seller.” The cost of gas production in western Russia is less than $1 but buyers in Europe are now paying $12-14 per barrel.

The environmental policy agenda has not progressed since 2008 and has been seen as a “luxury issue” by policy-makers. This is now changing with UK Climate Change Minister Greg Barker “calling the bottom” in terms of momentum against climate change.

The US, again, stands out as a bright spot with the displacement of coal by shale gas, although this was not planned or driven by policy. Similarly, the UK’s own reduction of CO2 emissions in the 1990s was driven by its own “dash for gas”.

As many analysts have said, North American energy independence would have profound geo-political implications for the Middle East. The USA may lose its strategic interest in the region and Asia – especially China – will become more interested.

Most construction costs for smart grids and cross-border interconnection will be covered by private investment. Hughes explained: “In many cases, regulators in whatever sphere they happen to be, see their prime duty as squeezing the supply side to the benefit of the consumer.

“That’s all well and good but that then does not incentivise these new investments which are becoming vital to our energy future. It’s a massive challenge to politicians and especially in an era when energy prices are becoming more and more sensitive as an issue to voters and to people in general.”

A balance between environmental goals and competitiveness must also be struck. In Germany, prices are “going through the roof” but the same is happening with CO2 emissions. The German economy is “being rendered less and less competitive” by higher energy prices.

E.ON Chief Executive Johannes Teyssen has warned that Europe is looking at a loss of industrial competitiveness and jobs “on a major scale” as energy-intensive industries relocate to North America.

Throughout his career, Hughes has seen a “fundamental difference” between the life cycle of the energy sector (10-20 years) and the much shorter life cycle of democratic politics. Coherency and consistency is often lacking in the West.

The business model for ‘oil majors’ will potentially come under pressure if oil prices start to weaken. Resource nationalism has pushed these companies away from the major low cost hydrocarbon reserves and up the ‘cost of supply’ curve. These extra costs are usually covered by a strengthening price.

Indeed, many of the niche opportunities will be more open to smaller, independent players, as seen by the development of shale gas in the USA.

China has a very coherent energy policy, Hughes reflected, and is actually doing more for the environment than any other country although this is usually under-reported. The three drivers of security of supply, environment and price volatility are pushing China beyond hydrocarbons. China also has a “paranoia … about increasing dependency on oil imports, in terms of the sustainability of their economic miracle.” Firm Chinese policy will mitigate the growth of oil demand going forward.