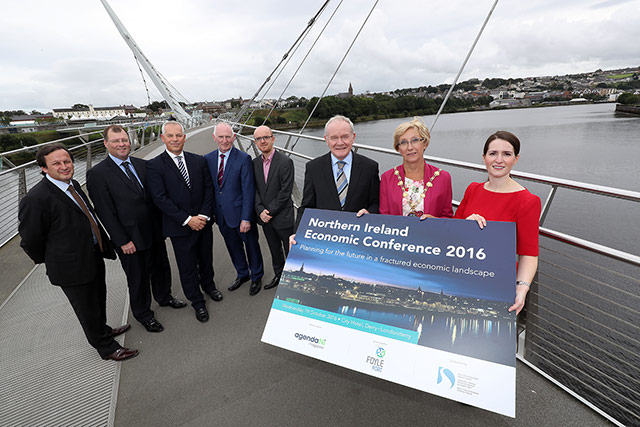 The Annual Northern Ireland Economic Conference, which is Northern Ireland’s major annual economic analysis event is set to take place in Derry~Londonderry for the first time next month.  The conference, which is now in its 21st year, provides a forum for business leaders and economic policy-makers to take a day out to examine the performance of, and prospects for, the local economy.  This year’s conference comes at a pivotal time for the economy as Northern Ireland faces exit from the EU whilst still not fully recovered from the 2007 global economic crash.

Having this major conference come to Derry city for the first time represents an excellent opportunity to highlight the importance of balanced regional economic development across Northern Ireland and will emphasise the key role Derry plays as an economic driver for the wider north west city region.

Derry City and Strabane District Council will host the conference, which takes place in the City Hotel on Wednesday 19th October.  Speaking at the event launch the Mayor of Derry City and Strabane District Council, Alderman Hilary McClintock said she was delighted the city was hosting such a high profile conference. “This event provides us with a unique opportunity to showcase our city and district to visiting policy makers and business leaders and be part of a series of discussions on the opportunities that are available for economic development and prosperity for our Council area and wider North West region.”

Deputy First Minister Martin McGuinness, who attended the event launch, will open the conference with a keynote address setting out the Executive’s priorities for economic growth and addressing the challenges which the local economy currently faces.  High on the agenda will be issues around Brexit, with the ongoing uncertainty around what this will mean for local businesses and the economy, particularly in border areas.  Former Taoiseach Bertie Ahern will address the conference on the impact of Brexit on the all island economy.

While there is a strong north west and cross-border contingent of speakers at this 21st annual conference, including Brian McGrath, Londonderry Port; Paddy Nixon, Ulster University; Leo Murphy, North West College; Gavin Killeen, Londonderry Chamber of Commerce; Michael Tunney, Donegal County Council and Paul Hannigan, Letterkenny IT the event has also attracted a high profile panel of visiting speakers.  Delegates will hear from Chris Giles, the Economics Editor of the Financial Times as well as speakers from the OECD and Finland.

The conference is being organised by agendaNi with the support of Derry City and Strabane District Council and Londonderry Port.  Limited delegate places are still available for anyone wishing to attend.