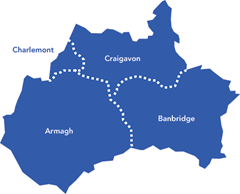 Armagh, Banbridge and Craigavon will have a contrasting mix of urban industry and large rural areas, and a roughly even political make-up.

Taking in West Down and most of the Orchard County, the Armagh, Banbridge and Craigavon district will roll down from Keady and Rathfriland as it approaches Lough Neagh.

Reflecting the trend for rural and suburban house-building, the population of Banbridge grew by 17 per cent between 2001 and 2011.  The rate was 15 per cent for Craigavon and 9 per cent for Armagh.  The three districts are covered by the Southern Health and Social Care Trust but are currently divided between the constituencies of Upper Bann, Newry and Armagh, Lagan Valley and South Down.

Boundary changes have separated the Slieve Croob area from Banbridge (and joined it with Newry, Mourne and Down) but added the Charlemont area of Dungannon and South Tyrone to the new council area.  2011 Census figures at this level are not yet available but each area had around 2,400 residents at the time of the 2011 Census.

When Northern Ireland’s current councils were established in 1973, the present councils replaced six smaller urban and rural districts.  Craigavon had been launched as the province’s projected new city in 1965 but did not develop as planned.  However, the new council became a borough by inheriting a charter from Lurgan, which had been awarded in 1949.  Portadown, its traditional rival, had been granted borough status in 1947.

Home to Ireland’s two main cathedrals, Armagh was granted city status in 1995 and was granted the office of Lord Mayor in June 2012, to mark the Queen’s diamond jubilee.  Banbridge has a similar size to Armagh city and serves as a popular shopping town and commuter settlement.

Under direct rule plans, the three councils would have been merged with Newry and Mourne to form the ‘South’ super-council.

Elections for the council are expected to take place in June 2014 with the new councillors sitting in ‘shadow’ format until they formally take office in April 2015.

As with the other new councils, Armagh, Banbridge and Craigavon will be free to choose the location of its headquarters; Craigavon is a favourite as it has the largest population share.  The council is likely to style itself as a district council, given its large area, although Armagh and Craigavon councillors will be keen to keep the privileges of a borough or city.

The Department of the Environment has previously suggested ‘civic councils’ i.e. sub-committees of the main councils which could carry out purely ceremonial functions such as the appointment of a Mayor or Lord Mayor.  More details will be announced when the Local Government (Reorganisation) Bill comes before the Assembly.