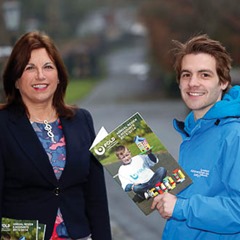 Northern Ireland’s largest social enterprise, Fold Housing Association, has highlighted that with an asset value of over £400 million, it is well-placed to help deliver Transforming Your Care and the Executive’s new housing strategy.

“Fold’s 30,000 customers remain at the heart of everything we do,” said its Chair, Diana Fitzsimons. “Our continued development of new community-based support services means residents and tenants are benefiting from a host of collaborative public and private partnerships delivering quality, innovation and great value.” This was helping Fold to realise its vision of “sustainable communities where tenants and residents live safely”.

Fold expects that its turnover will exceed £40 million in 2014-2015 for the first time. The group has also announced a two-year corporate charity partnership with the Alzheimer’s Society. Andy Boal, a community fundraiser with the society, explained that it was “extremely grateful” for that support: “As a charity, we rely on the generosity of organisations like Fold to help us support people to live well with dementia today and fund research to find a cure for tomorrow.”

He added that the partnership will be a “fantastic opportunity” to raise awareness about the society’s work amongst staff, tenants and other people using Fold’s services. Around 20,000 people in Northern Ireland are living with dementia, with Alzheimer’s disease accounting for more than half of cases.