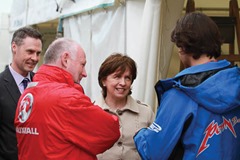 The province’s MEPs remained unchanged but the European election provided a boost for the unionist right and also a centre-ground protest vote.

Northern Ireland has returned the same three MEPs to the European Parliament after a competitive election which also resulted in significant swings in party votes. The quota (156,532) was substantially larger than in 2009 (121,144) due to a higher turnout.

Martina Anderson exceeded the quota at the first stage with 159,813 first preferences – a record for Sinn Féin. She now joins an all-island team of MEPs alongside Matt Carthy, Liadh Ní Riada and Lynn Boylan. The party remains part of the GUE/NGL grouping which gained 11 seats but is the joint smallest in the Parliament.

Diane Dodds recovered from her low performance in 2009 (88,346) to win 131,163 first preferences, although this was 13,765 votes lower than her party’s total in the council elections. Dodds owed her election to 36,293 transfers from Jim Allister. She and her party share common ground with UKIP and the Euro-sceptic Tories. The DUP ultimately hopes to hold the balance of power after the general election next May. 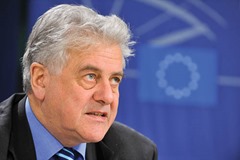 Jim Nicholson’s tally (83,438) was largely unchanged from 2009 and also 17,947 votes below the UUP’s local government poll. If it were not for 36,733.17 transfers from Allister and 22,218.28 from Dodds, he would have lost his seat to Alex Attwood. His 13.3 per cent share is the UUP’s lowest performance to date. While Nicholson is a member of the European Conservatives and Reformists for now, he has an open mind about which group to join in the new Parliament.

Likewise, despite an energetic campaign, Alex Attwood’s share of the vote (13 per cent) was a low point for the SDLP. Attwood received benefited from 81,594 first preferences and benefitted from 24,675.98 transfers from Anna Lo. Attwood’s poll was slightly below the SDLP’s local government performance (82,237) but higher than that taken by previous European candidate Alban Maginness (78,489).

All of the small parties did better in the European election than in the council election as it allowed them to gather votes from all parts of the province. Many of these were protest votes although from two very different quarters: hard-line unionists and liberals frustrated with the ‘tribal’ parties.

Back in 2009, the 66,137 first preferences for Jim Allister appeared to be his high point. This was bettered with 75,806 this time round. As explained, his transfers contributed to the election of Dodds and Nicholson – and the larger parties will want to draw TUV supporters back to them.

Anna Lo’s poll (44,432) was the Alliance Party’s best ever European performance and a major improvement on its 26,699 first preferences in 2009. A large number of Alliance votes (18,910.38) were non-transferable and many transfers went to the SDLP.

UKIP made its first appearance at a European election, having previously stood aside for the DUP and TUV. Henry Reilly’s 24,584 first preferences provide a good base in the party and his transfers mainly went to other unionists. The combined UKIP and TUV poll added up to 100,390 votes – almost a third of the unionist electorate. 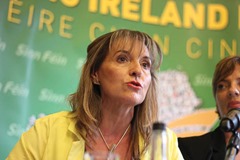 Ross Brown’s total (10,598) kept the Greens above the 10,000-mark for the second European election in a row but this was down from Steven Agnew’s 15,764 votes in 2009. The most unusual story of the election was Tina McKenzie’s departure from politics – announced on Thursday evening after most of her 10,553 supporters had voted. Transfers from Brown and McKenzie mainly benefitted Anna Lo.

The Tories will have been disappointed that Mark Brotherston’s poll (4,144) was exceeded by the spoilt ballots (9,968). The Conservatives were standing in their own right for the first time since 1994, when they had received 5,583 first preferences.

Turnout (52 per cent) improved significantly from the historic low (43 per cent) recorded five years ago. While the results across Europe were described as an earthquake, Northern Ireland’s MEPs remained unchanged. This is partly explained by their strong party bases and their Euro-scepticism.

Ian Parsley, who chairs the European Movement in Northern Ireland, was pleased that Europe had “finally made it on the debating table.”

Parsley remarked: “Although we might not agree with UKIP and TUV on Europe, their presence, and the enthusiasm of the other candidates have helped make this European Parliament election the first real campaign on EU issues, and not on local sectarian issues as in the past.”

* as Ulster Conservative and Unionist candidate