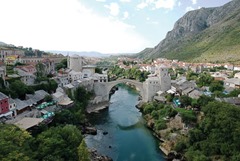 Peter Cheney examines the EU’s plans to expand in the Balkans.

EU enlargement into the Balkans over the next decade is likely to affect the level of Northern Ireland’s European funding as money moves towards poorer countries. Progress on enlargement has been slowed down by the economic crisis and ethnic tensions but it remains a high priority for the UK and Irish governments. They see EU membership as one way to avoid conflict in an often troubled region.

Northern Ireland is already sharing its experience from the peace process. The Assembly, Spirit of Enniskillen Trust and public sector consultancy NI-CO all have strong links with the region.

Out of the eight countries hoping to join, Iceland and Turkey are the outliers. Turkish membership has stalled over whether it is truly part of Europe, fears over immigration and the Cyprus conflict.

Iceland only applied for membership in 2009 after the collapse of the banking sector but its new government has started to withdraw from the process. Fishing rights are a major issue and the island is likely to be outvoted in EU negotiations.

That leaves six potential new members in the Western Balkans, an area still recovering from the wars of the 1990s. Montenegro has made the most progress. It broke away from Serbia in 2008 and unofficially uses the euro. Talks on membership began in 2012.

Serbia’s hopes for membership were held up by the search for two Bosnian war criminals, who were captured in 2011. Formal negotiations began in January but will be complicated by Kosovo’s own ambitions to join the EU.

Kosovo was separated from Serbia after the 1999 war and declared independence in 2008; this is not recognised by Serbia. The EU provides the country’s currency, police service and judiciary, and a NATO peace-keeping force remains in place.

Macedonia also hopes to join but progress has been held up by tense relations with Greece. Its southern neighbour objects to the use of the name Macedonia, a traditional Greek region.

Albania was Europe’s most isolated country during the Cold War. Immigration and alleged corruption have stalled progress on negotiations. It is a major transit country for human trafficking.

Bosnia and Herzegovina remains the hardest case. The Bosnian War cost around 100,000 lives and the peace has been maintained by an EU military mission since 2004. The country is divided into two separate areas: Republika Srpska (Serbian) and the Federation of Bosnia and Herzegovina (Muslim-Croat).

Jane Morrice, a local member of the European Economic and Social Committee, sees enlargement as a positive experience for Northern Ireland. “EU enlargement, particularly towards Eastern Europe, has brought a whole new dimension to life in our schools, our workplaces and our streets,” she told agendaNi. “It has taught us how to live with people who we see as different, to learn from them and be enriched by the experience.”