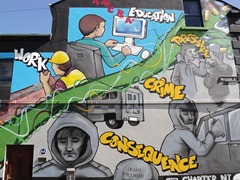 Councils will take on new responsibilities for improving Northern Ireland’s most deprived areas.

Urban regeneration policy was set by the Department of the Environment between 1973 and 1999 and responsibility then passed to the Department for Social Development (DSD). Its main programme – Neighbourhood Renewal – funds physical regeneration and community work in 36 areas: 15 in Belfast, four in Derry and 17 elsewhere.

Regeneration refers to “activities that reverse economic, social and physical decline in areas where market forces will not do this without the support of government.” Urban areas are those with 4,500 or more residents.

Smaller towns and villages are classed as being in rural areas and are covered by the Rural Development Programme, which will also transfer to local government.

The Office of the First Minister and Deputy First Minister (OFMDFM) has assumed responsibility for the Ilex urban regeneration company, the regeneration of former security-related sites, and the Social Investment Fund. These will not be transferred.

From April next year, each council will be responsible for managing the urban regeneration projects within its area. The DSD will still set the overall policy and take part in projects that are identified as regionally important.

Councils will be bound by the Urban Regeneration and Community Development Policy Framework and its four objectives:

2. strengthen the competitiveness of towns and cities;

3. improve linkages between “areas of need” and “areas of opportunity”; and

Northern Ireland’s urban areas have lower levels of employment, enterprise and entrepreneurship than their European counterparts. Business improvement districts are seen as an important option for improving competitiveness.

Value for money will become more important. The resource budget will fall from £60.5 million to £55 million between this financial year and the next one. The capital budget will stay constant at £28 million but faces a real terms decrease due to inflation.

The framework implies that all neighbourhoods have some potential but the poorest ones do not have the full range of opportunities to reach that potential. It proposes better transport links between deprived and non-deprived areas and more brownfield development. The department also wants to encourage more volunteering and local asset ownership by community groups.

The concentration of deprived areas varies across Northern Ireland with the highest levels found in Belfast, Derry and Craigavon. However, more affluent councils have pointed out that they have pockets of deprivation (e.g. Kilcooley in Bangor) which have sometimes been overlooked by funders in the past.

Councils will receive guidance and analysis on general regeneration policy from DSD. On the other hand, they will also gather the views of local people more effectively through the community planning process.