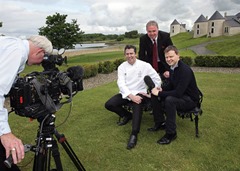 By pro-actively working with the international media, Tourism Ireland is helping to promote the province to a global audience.

Tourism Ireland has a packed programme of promotions under way around the globe this year – highlighting Northern Ireland and the fantastic calendar of events taking place right throughout 2013 to potential holiday-makers everywhere. The organisation is helping to generate huge positive publicity about Northern Ireland. In 2012, articles or broadcasts which appeared in international print, broadcast and online media channels delivered positive exposure valued at an estimated £89 million.

The G8 Summit is an unprecedented opportunity to showcase Fermanagh and Northern Ireland, not only to the world leaders and their teams but also, through the accompanying international media, to millions of potential visitors across the world. It will raise the profile of Northern Ireland and ultimately help increase visitor numbers from overseas.

Tourism Ireland’s promotional programme and publicity drive have been stepped up – before, during and after the G8 – to capitalise on the tourism potential of the summit. Activity includes familiarisation visits to Fermanagh and Northern Ireland for influential travel and lifestyle media – including a crew from BBC Breakfast, who filmed a feature at the Lough Erne Resort which aired to an estimated 1.5 million TV viewers across Great Britain in advance of the summit.

In the films, Phil describes Belfast as a “total must visit” and is seen taking a fun Segway tour of Belfast, trying some culinary offerings in St George’s Market and Made in Belfast, indulging his passion for music at the Oh Yeah Centre and thrill-seeking on a dirt-bike at the Barnett Demesne Trails and Jumps Park. He also visits Titanic Belfast and takes a trip along the spectacular Causeway Coastal Route to the Giant’s Causeway.

It’s all about the bikes

Tourism Ireland launched the Grande Partenza (or “Big Start”) of the Giro d’Italia 2014 in Vicenza in Northern Italy, the venue for the 17th stage of this year’s Giro. At a specially-organised media event in Vicenza, Tourism Ireland took the opportunity to highlight to the hugely influential international and Italian journalists who were following this year’s race that the Grande Partenza will take place in Northern Ireland for the first time ever in May 2014.

Over 70 Italian and international sports and lifestyle journalists were in attendance, as well as senior representatives of RCS Sport (the organisers of the event) and La Gazzetta dello Sport (Italy’s most widely-read national daily newspaper, and the official ‘organ’ for the Giro).

With routes in Belfast and Armagh, next year’s Giro d’Italia will provide another wonderful platform to promote Northern Ireland on the global stage and Tourism Ireland will take every opportunity over the coming year to leverage the tourism potential of this prestigious sporting event.

Niall Gibbons, Chief Executive of Tourism Ireland, said: “It is a wonderful coup for Northern Ireland that the Grande Partenza of the Giro d’Italia will take place here in 2014. There is huge interest in the event, which will be seen by an estimated 775 million sports and cycling fans everywhere, presenting us with a fantastic opportunity to highlight Northern Ireland around the world as a top location for sporting events, as well as a wonderful holiday destination.”