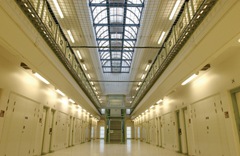 As the parties set out their priorities for policing and justice locally, immigration is the national focus.

Despite justice being the most recently devolved area to the Northern Ireland Assembly, Parliament will retain power over politically and legally sensitive areas such as national security and the work of the UK Border Agency.

Improving the risk management of sex offenders, tackling domestic abuse, knife crime, and alcohol and drug related crime, would be priorities. The 403 officers currently involved in criminal justice units need to be moved onto the streets.

A greater number of neighbourhood officers would be introduced, with fixed penalty notices and police cautions used to deal with fines rather than burdening the courts system.

A reduction in the “crippling” legal aid bill is another DUP priority and they would call for a re-assessment of the high number of prisoners who are on remand.

Giving themselves credit for “taking policing and justice away from Westminster and putting it into the hands of locally elected representatives”, the party seek unarmed civic policing in the community. They say they will “continue to set the agenda” on policing. Transparency in the criminal justice system is demanded and Sinn Feín would eradicate the use of plastic bullets, which they claim are “lethal weapons.”

“Politically driven” organisations such as MI5 and the Serious Organised Crime

Agency “must go”. They also focus on ‘truth recovery’, demanding a full independent public inquiry into the murder of Pat Finucane.

The SDLP would seek to create a sentencing guidelines council, review knife crime penalties, establish a charter of rights for victims of crime, and place the Prisoner Ombudsman on a statutory footing.

Reforms are called for in the Prison Service and the PPS, and in the provision of legal aid. The party recognises the “opportunities provided by devolution of justice” but calls for primacy of national security to be with the PSNI rather than MI5. It states that the recent report on the Omagh bomb from the Northern Ireland Affairs Committee “confirms the glaring gaps in the accountability of the security service.”

Protecting Northern Ireland from the threat posed by dissident republican terrorism is a priority. Stop and search powers for police would be strengthened so that knife crime can be tackled.

Binge drinking would be targeted by taxing super-strength beers, ciders and alco-pops, “but not the everyday pint.”

Holding the local justice job, Alliance would also seek to reform the legal aid system, concentrate on victims and witnesses, support more officers on the

Immigration is an important issue for the party which supports a points-based system linked to skills “as the least worst of all the alternatives.”

They claim there is a need for a stronger safety net for immigrants when they lose employment and they want to “take the politics out of asylum” by taking responsibility away from the Home Office and giving it to an independent agency.

“Firm and fair” immigration rules are promised by Labour, who would give the Border Agency the same level of powers as police in addition to “thousands more” immigration officers. A new Australian- style points-based system would ensure no unskilled migration from outside the EU, and visa applicants must take the English test before entry to the UK.

The Lib Dems would introduce a points- based system which ensures that migrants can only work in a region where their skills are needed.

The TUV claim that under Sinn Féin, there will be “Patten-style” reform of the Prison Service, which they will resist. On immigration they advocate rigorous application of border controls and a moratorium on all third world immigration until there is less pressure on public services and overcrowding.