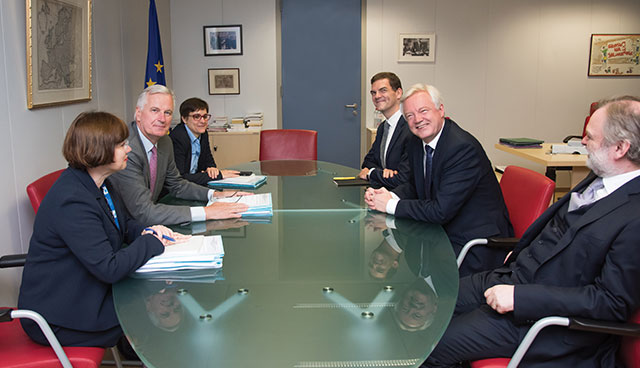 Contrary to widespread opinion, Britain’s negotiators probably do have their own ‘imaginative’, perhaps ‘Machiavellian’, solution for the Irish border problem. It might meet demands that Northern Ireland is treated the same as the rest of the UK, but are the DUP being duped? Asks Emeritus Professor of Political Geography at QUB, James Anderson.

The EU-UK agreement of 8 December to move negotiations on to include their trading relationship may tilt things towards a ‘softer’ Brexit, but Irish or anti-Brexit triumphalism would be pre-mature and mistaken. The agreement text is ‘creatively ambiguous’, ‘non-binding’ in lacking legal standing and ‘nothing is agreed until everything is agreed’. It seems to me there were five main scenarios before the agreement and there are still the same five with all still to play for, though some of the possibilities will now play out differently.

No deal: which (notwithstanding the ‘non-binding’ agreement) could still result in a ‘hard’ land border between Northern Ireland and the Irish Republic. If the external border of the single market (SM) and the customs union (CU), it would leak like a sieve and provide a bonanza for smuggler gangs, and also a juicy target for ‘dissident’ paramilitaries. It severs North-South peace agreement institutions, and the daily border-crossing commuting and production processes of our all-island economy, and it generates civil disobedience.

No problem: the UK leaves the EU but stays in the SM or CU, and all borders remain unchanged. It’s the preferred option of the EU, the Irish Republic and probably a majority in Northern Ireland, but is blocked by British Brexiters who want freedom to make their own trade deals with other countries. `

Special status: for Northern Ireland, staying in or ‘shadowing’ the procedures of the SM/CU, would prevent a ‘hard’ land border, and safeguard the all-island economy including the North’s continental EU markets and the South’s vital markets in Britain.

Special status is probably the next-best option for the EU, the Irish Republic and, again, a majority in Northern Ireland. It relies on sea border controls around the island of Ireland at ports and airports, already better equipped, more secure and much less disruptive than the land border. It’s something like a ‘double-doors’ solution where the island is analogous to the ‘vestibule’ space in between the two security doors for entering and leaving a bank: one door links the all-island economy to Britain, the other door to the continental EU. There’s the symmetry of both doors being comparatively ‘soft’ selective borders, but together they provide a much more secure border for the continental SM/CU than a ‘hard’ Irish land border ever could.

However special status is now opposed by the DUP on the spurious argument (see below) that it undermines Northern Ireland’s ‘constitutional position’ as politically in the UK. Britain’s negotiators also oppose it, but for the very different reason that it removes their main bargaining chip, the threat of a hard land border and their so-far hidden but probable strategy of using it as the means of achieving their British solution.

The British solution: the whole UK retains trading access to the SM/CU by shadowing their procedures and this solves the border problem, but because not actually a member, the UK should also be free to make its own trade deals. Many will dismiss this as ‘wanting their cake and eating it’, or implausible ‘pie in the sky’. Britain’s official negotiators have not yet ‘come clean’ on it, instead blowing the smokescreen of a ‘frictionless’ land border with loud protests about not wanting a hard one; and they’ve been coy about what they do want. Critics wrongly conclude they don’t know themselves. It’s much more likely they’re hiding their strategy until serious trade negotiations start, and are coy because it hinges on the bargaining chip of threating a hard border which combines carrot and stick. Effectively they could say to the EU: ‘allow us to shadow the SM/CU and make our own trade deals, we promise not to ship the goods on to the EU, and we’ve solved the border problem; because otherwise you – the EU and the Irish Republic – will have no alternative but to create a hard and insecure land border to try and protect your SM and CU’. 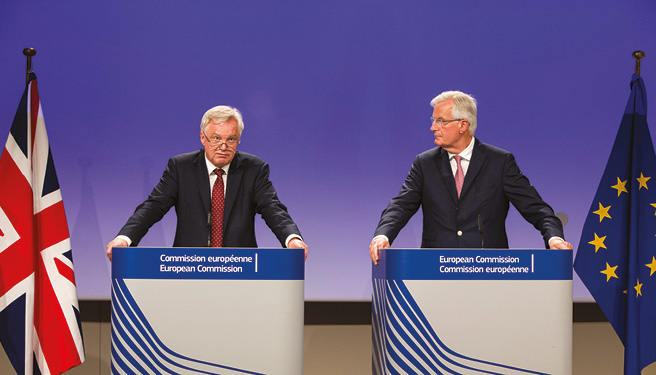 Notwithstanding all the Brexit cock-ups, here most likely it’s the critics who don’t know what’s going on, for this is the only scenario that makes any sense of the consistently stated (and seemingly contradictory) British positions, including no hard border, no sea border, the whole UK shadows or aligns with the SM/CU, and also makes trade deals with other countries. And here the deals are a weapon, as well as a desired objective. For example, a deal with Trump could mean chlorinated chicken and hormoned beef get into Northern Ireland and thence the EU. With such non-too-subtle border threats, the ‘British solution’ suddenly seems a bit less implausible, more perfidious. Machiavelli would approve.

It might indeed be the best available way of avoiding the border problem, and therefore get support in Ireland or possibly divide off other member-states? The British, while proclaiming their strong opposition to a hard border, have created the conditions for just that; and for blaming the EU and the Republic of Ireland for the resulting ‘no deal’ disaster in Ireland, North and South. That is no doubt why the Irish Government wanted firm British assurances that there will continue to be ‘regulatory alignment’ between the North and South in the event of no deal. Otherwise disaster, with Northern Ireland inevitably suffering collateral damage or not-so-‘friendly fire’. In suitably biblical terms, the DUP MPs propping up May’s government could end up as the ‘DUPes’ who ‘sold their birthright for a mess of pottage’, collaborators in the sacrifice of their own Northern Ireland. It seems Britain’s negotiators have quite a lot to be coy about.

“The practical reality is sea border controls would be a minor inconvenience for people unnoticed by most, and very minor compared to the disruptions of a hard land border.”

Perhaps Britain’s bargaining chip of the hard border threat has been weakened or even nullified by its assurances that in the event of no overall deal the UK “will maintain full alignment” with the SM and CU. Its new trade deals could actually add to the EU’s need for customs checks; and it is ambiguous whether ‘full alignment’ refers to the whole UK or only to Northern Ireland. Furthermore, the agreement introduces the possibility that if there is no deal a Northern Ireland Executive and Assembly could “agree that distinct arrangements are appropriate for Northern Ireland” – and conceivably that could involve a choice between a hard border disaster and an Irish Sea border solution. The agreement was a fudge to move negotiations on to the next phase and it leaves all the major issues still to be resolved. But, if a hard border had to be created by the EU and the Republic to protect the SM and CU, the UK might deny responsibility and claim ‘nothing is agreed’, its prior but ‘non-binding’ assurances now null and void. The threat of a hard border disaster could be very much alive and actually quite potent if coupled with our fifth scenario.

Crashing out to ensure no deal: More realistic or extreme Brexiteers may conclude that the threat strategy to ‘shadow’ the SM/CU and make their own trade deals has little chance of success. The 8 December agreement could eventually tilt things away from a softer Brexit. Whether as an additional bargaining threat or because they actively want it, crashing out is the ‘nuclear’ option of collapsing negotiations at a point where the EU can be blamed (what will they do without it?). It could provide cover for reneging on the assurances of 8 December. In practical terms, it offers the possibility of a hard, decisive Brexit which they could not achieve democratically by a parliamentary majority, because the EU is the UK’s biggest trading partner. But for the more extreme, exit can’t happen soon enough. They fear compromises with the EU in a long transition. Forget the substantial ‘cake’ of EU trade they already have, an early exit would quickly restore their independence to again stride the world making new deals with all and sundry. It’s the right-wing nationalistic realm where empire nostalgia meets Little England chauvinism meets neo-liberal fantasy or ‘Britain in Wonderland’. –

Just possibly, Britain’s negotiators might achieve a qualified version of retaining some access to the SM and making their own trade deals. But it would be prudent to assume that they won’t; that the whole UK will not be ‘shadowing’ the SM/CU; and that a hard land border remains the immediate threat.

Ireland’s familiar green and orange responses – knee-jerk demands for a highly unlikely border poll, or assumptions that it’s all about the political union with Britain (which can only be changed by a poll) – have been divisive distractions. The DUP’s attempted constitutional veto runs counter to the 56 per cent anti-Brexit majority in Northern Ireland, which included about a third of unionist voters. Recent opinion polls showed unionist voters were more open to special status than the politicians they elected, with 56 per cent agreeing with controls between the island and Britain but continuing free movement across the land border, and 59 per cent accepting border controls between the North and Britain – giving both positions very large majorities when the much bigger percentage support from non-unionists is added.

Worries about an economic Irish Sea border detaching Northern Ireland from Britain politically are absurdly exaggerated. Northern Ireland is already semi-detached in multiple ways without the constitutional union being at all endangered (and some unionists revel in semi-detachment allowing restrictive legislation on ‘moral issues’). The practical reality is sea border controls would be a minor inconvenience for people unnoticed by most, and very minor compared to the disruptions of a hard land border. For freight movements the inconvenience and costs would be more serious, but again substantially less overall than at a land border. Those who object to the inconvenience of a ‘double-doors’ solution should reflect they could get a malign version of it as well if the continental EU and Britain were supposed to rely on a leaky land border to exclude unwanted goods or immigrants.

‘Special status’ Scenario 3 may well prove to be the only sensible damage-limitation alternative for everyone in Ireland – North and South, unionist, nationalist, and neither – everyone, except paramilitary and smuggler gangs.