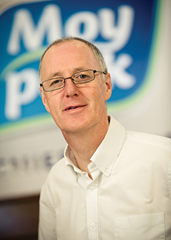 “Everything, at the end of the day, comes through integrity and teamwork,” says Mike Mullan as he discusses how Northern Ireland’s largest company puts its values into practice. Mullan is Executive Director for Human Resources and Business Improvement at Moy Park and also chairs CBI Northern Ireland’s Employment and Skills Committee.

First, the province needs to bring in “transformational world class leadership skills”. To put this into practice, Moy Park sends one of its directors each year to a leadership programme at INSEAD (the Institut Européen d’Administration des Affaires) in Paris, one of the world’s top five business schools.

Secondly, “much more” must be done to promote STEM subjects. The company recognises the importance of further education and sponsors several students through college. Mullan is “exceedingly proud” of its Tasty Careers initiative which takes 20-30 young graduates around schools to show the “terrific” careers available in the food sector.

“We are facing a government which has tight budget constraints,” he comments. “We are facing an economic environment where the previous levers of jobs – the construction industry, job creation through the government, retailing – have all gone and are not going to come back.” Instead, Northern Ireland needs to compete globally by making the most of its niches in agri-food, pharmaceuticals, engineering, IT and tourism.

The CBI has also called for the rationalisation of the schools estate, to free up funding for pupils, and a continued drive to improve basic literacy and numeracy. Its proposals are contained in ‘Time for action: delivering public services in a time of austerity’, published in September 2010.

Moy Park’s strategy is based on “growth and capability”. This is underpinned by six values: teamwork, relationships, determination, accountability, integrity and mutual respect.

He highlights integrity and teamwork as the most important. The company looks for recruits who are passionate about food (locally farmed fresh produce) and passionate about customers, and have good communication and inter-personal skills. However, it also appreciates that teams “don’t just happen” and need to be developed: “You need time to build teams, and teams are created and led.”

Skills development in Moy Park also means developing knowledge, which involves knowing the demands of consumers, and applying skills in a structured way through the DMAIC (define, measure, analyse, improve and control) process and other models. “It’s not about being hit by problems but it’s about solving problems and making things better,” he says.

Mullan thinks that ‘business in the community’ is a “great phraseology” and Moy Park views itself as a stakeholder in the community. This encompasses its relations with customers and with employees and the need for environmental sustainability i.e. in farming, water and energy use, and waste reduction.

Asked what changes he has seen over his career in human resources, he points to the “constant need” for improvement and learning. “We are now in a global industry and the expectations of our customers are never-ending,” Mullan remarks. “That’s the right way it should be.”

Staff need to become their own “player-coach” and therefore be self-reflective and able to critique, learn and take feedback. “Not one person can do that on their own,” he adds. This can only happen through “committed, interdependent, trust-based teams.”