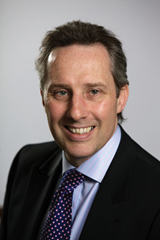 North Antrim MP Ian Paisley Junior was elected to Parliament last May, where he is the DUP’s spokesman on environment, food and rural affairs, and work and pensions. He sat at Stormont from 1998 to June 2010 and was an OFMDFM junior minister (2007-2008). Here, he looks back on his first year at Westminster and says the Assembly needs mature debating to make it more relevant.

Briefly sum up your first year as MP.

It’s been a very pleasing first year as a Member of Parliament. I was one of over 230 new MPs to be elected and with one of the most comfortable majorities after what many in the press had predicted, wrongly, would be a close-run thing.

Entering the House is an awesome experience, but being part of a new Parliament with so many new members has been a great advantage because there is so much energy, expectation and ambition.

There have been some outstanding moments: the Queen’s Speech, where I was able to stand shoulder to shoulder with the new government minister Theresa May at the bar of the House of Lords, and the Remembrance Service.

Making my maiden speech was nerve- wrecking but I think I carried it off. With my mother and father sitting in the public gallery looking down at me made it all the more a huge moment of pride for me. Also when my father was elevated to the Lords, I got to stand at the bar of the Lords for his ceremony – a privilege extended only to a very few.

Each Wednesday, Prime Minister’s questions is real theatre and the sombre occasion of the reading of the names of the armed service personnel killed in action juxtaposes with the hurly-burly and banter of party squabbling. I’ve managed to put my constituency needs on the agenda and will continue to do so.

How does the political atmosphere differ between Stormont and Westminster?

The difference in atmosphere between Stormont and Westminster really couldn’t be more stark. Westminster is a real debating chamber. No getting up reading a five-minute prepared script and then disappearing off to do whatever you want. Do that once in Westminster and you won’t get called again for at least a year.

Westminster protocol demands you are there for the start and finish of any debate you participate in, and remain in the chamber and play a part. Reading speeches just isn’t done. You’re expected to know your stuff and be able to speak confidently and take interventions and debate robustly and rigorously the points.

You also get the sense that you are playing a part in the shaping and formation of national government policy and legislation. In the Assembly that can’t be said. I was a member of the Assembly for 13 years. Don’t get me wrong, I enjoyed it but the Assembly is not a debating chamber – more’s the pity.

Proper debating is stifled and suffocated by a host of reasons: inexperience, lack of confidence, deficiency in some members’ ability and a protocol that has grown up of five-minute speeches with one intervention and a driver to try to get a line in the local newspaper rather than to effect change or drive debate. If the Assembly wants to become more relevant, it needs to allow the debating chamber to breathe a little more.

Since resigning my Assembly seat I’ve gone back to the Assembly on a couple of occasions. Each time I am convinced I made the correct decision. The Assembly is more like a grand county council rather than a regional parliament.

Maybe that’s because so many MLAs come from council background but our councils are a different beast. They grew out of a period when there was no real local parliament so members became voices, not makers of legislation. Many come from a background of grasping at government with one hand and a begging bowl in the other, demanding spending on services without any realisation of accountability or responsibility.

A regional Assembly that wants to be a devolved parliament must cast off this straightjacket. The Assembly too frequently allows itself to be led by the nose on topics. The nonsense, for example, of bringing in legislation to fine children for not wearing safety helmets whilst on their push bikes was a media- driven craze. It is all too obvious how the Assembly allows itself to be driven by media stories and not by strategy. That criticism cannot be said of Parliament.

What is your assessment of the Government’s plans for welfare reform?

I sit on the committee dealing with welfare reform and to say I am not impressed with the Government’s Bill would be an understatement.

My impression is that very few MPs actually would know their way around a benefit claim form, let alone know how the system works and where improvements could be found. I’m all for improving the system but we have got to remove the ideology out of the Bill and address it from the perspective of a community that has needs, not a perspective that suggests the community is ripping off the state.

What are your main interests outside politics?

I have four children ranging from age six to 16 so they largely dictate what my life is spent doing away from work. My big passion is motorbikes and motorsport. I don’t get as much time as I used to enjoy my bike but when I do it is sheer bliss. I enjoy music, concerts, film and rugby. I have lots of interests away from politics that I find keep me well-grounded in the real world.