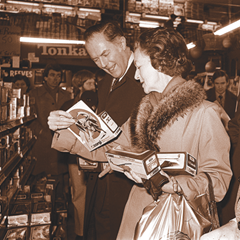 Peter Cheney examines the brief for Mrs Thatcher’s first Secretary of State, Humphrey Atkins, who arrived in 1979. Despite the serious difficulties, officials believed that a stable political solution could eventually be found.

NIO officials presented Northern Ireland as a society with a “deep tribal split” and major political and economic problems, when briefing new Secretary of State Humphrey Atkins in 1979. The Thatcher Government, though, was inheriting an improving security situation and officials had a detailed understanding of the challenges that their new ministers would face.

The new year releases include the first-day brief for Humphrey Atkins, the Secretary of State who took office in May 1979. Atkins was Mrs Thatcher’s second choice. Her close friend and Shadow Northern Ireland Secretary, Airey Neave, had been murdered by the INLA as the election campaign began.

Under Roy Mason, the number of conflict-related deaths had fallen from 296 in 1976 to 82 in 1978 but little progress had been made on a political settlement or on economic development.

“Northern Ireland is a community divided within itself,” the brief commences. “The million Protestants and half-million Catholics are divided not only by religion, but by ethnic origins – the Ulster Scot and the Irish Celt – and by culture – schools, newspapers and games. Other countries have such divisions, but in Northern Ireland they coincide to produce a deep tribal split.”

None of the new ministers had previous experience of Northern Ireland. The Conservative manifesto had proposed one or more ‘regional councils’ with stronger local government powers; Atkins quickly concluded that this would not work, due to nationalist opposition.

The brief’s language varies between describing the province’s society as a community or two communities. It notes: “Both communities see themselves as besieged minorities – the Protestants threatened by the Catholic majority in the whole island; and the Catholics by the Protestant majority in the North. Each seeks to be part of a majority.” The exclusion of Catholics under majority rule was “deeply felt by many Catholics … and it led to the perception of gross discrimination.”

After the Sunningdale settlement to restore devolution, many unionists had viewed the Council of Ireland as “a first step to the unity of Ireland” and “a ‘Loyalist’ strike backed by widespread intimidation led to the collapse of the Executive” in 1974. Any new arrangements needed to be stable, durable and “widely acceptable in both communities.”

Meanwhile, in Great Britain, it adds: “There are signs of increasing concern about the continuing sacrifice of British lives and money – apparently to no purpose.”

Northern Ireland’s economy was vulnerable due to “volatile international markets” for textiles and shipbuilding, the “severe constraints” on public expenditure, the need to import fuel and its dependence on the Common Agricultural Policy, set in Brussels.

“Public expenditure has been the key instrument of economic policy,” it states. Unemployment (11 per cent) was the highest in the UK and 31,000 manufacturing jobs were lost between 1974 and 1978. It starkly warns: “Substantial parts of the economic base have been permanently lost through the demise of a number of significant companies.”

Over 40 per cent of all jobs were in the public sector but those jobs were being used “to contain unemployment” i.e. not as an intended long-term policy. High insurance premiums and claims were causing “acute difficulties” for some companies.

Lower earnings, larger families, lower labour force participation and higher unemployment generated “substantially higher levels of poverty” compared to Britain. Northern Ireland had the UK’s highest rates for births, deaths and hospital discharges, which in turn added pressure on public services. The standard of housing “falls far short of that in Great Britain” with 20 per cent of all dwellings being unfit for habitation.

The Government needed to establish and reinforce the conditions for economic growth with more competitive incentives than those in the Irish Republic. Harland and Wolff and Shorts could have “a significant part to play in the future economy of Northern Ireland” if growth could be restored. Terrorism, it acknowledged, had an impact on where international firms decided to locate their firms.

Round table talks in early 1980 were boycotted by the UUP and broke up without agreement. The following year was dominated by the hunger strikes and the associated violence.

Humphrey Atkins was succeeded by James Prior in September 1981 and became the Commons spokesman for Foreign Secretary Lord Carrington. Atkins and Carrington resigned from the Government in April 1982, to take responsibility for the loss of the Falkland Islands. Atkins was elevated to the Lords in 1987 and died in 1996, at the age of 74.

The brief took a frank assessment of Northern Ireland’s long-term future but also anticipated an “acceptable system” of government which was finally achieved in the Good Friday Agreement.

“The long-term aspirations of the majority (continued union with Britain) and the [minority] (the unity of Ireland) are incompatible. But it should be possible for each side to recognise the sincerity of the other’s aspiration, and for the present to agree to differ”.

The UUP, under Harry West, wanted to return to pre-1972 majority rule and feared that Ian Paisley “will beat the tribal drum at any sign of deviation.” The Ulster Unionists viewed the SDLP as “a Trojan Horse” which wanted “rigged” representation in government for nationalists and was “seeking to subvert the constitution by working towards a united Ireland.”

Gerry Fitt’s SDLP, in fairness, was “unashamedly nationalist in aspiration” and appreciated the risks of withdrawing the army. The party “habitually tries to manipulate opinion in Dublin, America and London … rather than seeking directly to persuade Unionist opinion.”

The NIO was clearly frustrated by both parties. The SDLP looked back to the 1974 Executive “as the golden age” while the UUP yearned for the 1960s: “Neither shows sufficient realisation that the clock cannot be put back.” In addition, the southern parties “offer no practical help” and their “constant harping” about Irish unity “provokes Unionist fears”.