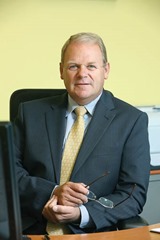 Brian Ambrose outlines the economic importance of the Belfast-Heathrow link.

The five terminals of Heathrow Airport, which span 1,227 hectares, accommodate an average of 191,200 passengers each day travelling to and from over 180 destinations in more than 80 countries across the world. It is therefore not surprising that Heathrow has, since 2000, been the world’s busiest airport by international passenger traffic.

However, as the only major international hub in the UK, Heathrow has the extra responsibility of efficiently catering for the needs of both business and leisure passengers from across the UK and Ireland.

The hub not only connects these regional passengers to exotic long-haul destinations but also acts as a powerful driving force for local business right here on our doorstep in Northern Ireland where air access, particularly through Heathrow, plays a vital role in our overseas business and trade.

When you consider that Northern Ireland exports via air have now reached £1 billion and that 60 per cent of them travel through a hub airport to reach their final destination, air connectivity with Heathrow is, and will continue to be, a fundamental driving force for business and future growth in the region (Oxford Economics, 2012).

In mid-2012, the announcement that bmi was ceasing all operations, which included the Belfast City-Heathrow route, certainly put the region on tender hooks. The stark reality of a Northern Ireland without a city centre link to Heathrow dawned upon politicians, commuters and business leaders who rely heavily on the link.

Their sigh of relief was almost audible when the acquisition of bmi by International Airlines Group (IAG) was confirmed. George Best Belfast City Airport then won this competitive tender process for British Airways which successfully filled the Belfast City-Heathrow void left by bmi.

The move of all Aer Lingus Northern Ireland operations, including their regular route to Heathrow, to Belfast City Airport in October 2012 further cemented the link between Belfast and the international hub.

Through Aer Lingus and British Airways, inbound and outbound passengers have the choice of up to 10 flights between Belfast City and Heathrow each day. This accessibility and the convenient flight times mean that Belfast, and Northern Ireland, are, “open for business” and by 2021, an additional 11.2 million visitors are expected to travel to the UK.

At Belfast City Airport, continued private investment, which has exceeded £15 million in the last four years alone, ensures that we have the capacity to manage this and that our passengers are welcomed into Northern Ireland through a modern airport, with state of the art, efficient facilities.

The Lucid Talk poll revealed that 56 per cent of people stated that growth at Belfast City Airport is important to Belfast and Northern Ireland’s future economic growth which is extremely encouraging.

Between January 2013 and June 2013 (inclusive), we transported 322,586 passengers between Belfast City Airport and Heathrow through Aer Lingus and British Airways. This, coupled with a strong domestic route network and a selection of popular European routes, has ensured Belfast City Airport is on course for our busiest year yet!

Welcome news I am sure for the plethora of hospitality and retail businesses that directly benefit from our operations.

The airport will continue to work with local government authorities and the Assembly to ensure passengers and businesses in Belfast and Northern Ireland are best served on all fronts.