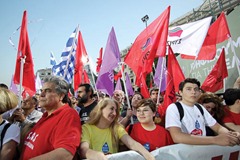 Alex Tsipras’ election on an anti-austerity platform is the latest phase in an arduous journey which began with Greece’s international bail-out in 2010. Tsipras is Greece’s fifth Prime Minister in as many years. Since his election in January, he has had to walk a tightrope between his pre-election promises and the demands of his country’s creditors.

Syriza’s pledges included a debt reduction, an increase in the minimum wage and an end to co-operation with the troika of the European Central Bank, the European Commission and the IMF. However, within days of assuming his role, Tsipras was forced to issue a statement reaffirming his government’s commitment to paying back its debts. After a month in office, and with the bail-out agreement set to expire on 28 February, Tsipras and his Finance Minister, Yanis Varousfakis, shelved much of their manifesto for a four-month bail-out extension. The Greeks sought to secure the approval of other EU member states through reform commitments which included an increased impetus on combating tax evasion, a consolidation of pension funds, and an efficiency programme. With approval secured, they received an extension to the bail-out alongside an agreement to work closely with creditors, a conditional promise of future transfer of central bank bond purchase profits to Athens, and a reduction in the required 2015 budget surplus.

Following a failure to convince lenders (through the ‘Brussels group’ of representatives from the EU and the IMF) that it has developed a solid reform package, the Syriza Government now faces looming repayment deadlines. The rejected package was intended to demonstrate Athens’ commitment to financial discipline in order to unlock €7.2 billion in undisbursed bail-out funds. Arguing for a restructuring of debt repayments, Tsipras defiantly maintained: “It’s true that we are seeking an honest compromise with our lenders but don’t expect an unconditional agreement from us.”