With many of Northern Ireland’s top tourist attractions and destinations based on and around the natural landscape, it is impossible to ignore the contribution geology has made to this sector, but it is difficult to quantify. A recent report from the UK National Commission for UNESCO (UKNC) has tried to address that by studying the value of some of our most cherished natural heritage sites and reports that those in Northern Ireland contribute almost £500 million to Northern Ireland’s economy annually.

The research carried out by the UKNC highlights not just the financial value but also the environmental and cultural benefits of 76 UNESCO projects in the UK. It also makes an assessment on their contribution to helping achieve the UN’s Sustainable Development Goals. The numerous projects make up a vast network that is rooted in communities, rich in potential and impacting lives in the UK and around the world. The report indicates that in total, the UNESCO projects in the UK generate an estimated £151 million of direct financial benefits to local communities each year, helping them to protect and conserve some of the most important places across the country. However, this total figure is from across the UK and disguises significant variations, with those in Northern Ireland being proportionately higher.

The report also highlights the ability of UNESCO designated sites to attract additional income primarily resulting from the recognition of the UNESCO brand as a driver for tourism, but also the international recognition of the global importance and significance of designated areas. In the case of Northern Ireland, this is as a direct result of internationally important geology. UNESCO can also capitalise on global networks, which may seem less significant during the Covid-19 pandemic, but these networks also operate virtually and are vital for capacity-building and knowledge exchange.

In Northern Ireland there are six UNESCO projects including one World Heritage Site, one UNESCO Global Geopark, two UNESCO University Professorships and two Cities of Lifelong Learning. Of these, two are used as case studies within the report; the Giant’s Causeway and Causeway Coast World Heritage Site and the Marble Arch Caves UNESCO Global Geopark. Both sites are recognised by UNESCO because of their internationally important geological heritage and have been used as case studies within the report because of their unequivocal contribution to the Northern Ireland economy and to their local communities.

The Giant’s Causeway and Causeway Coast World Heritage Site, referred to as ‘The Giant’s Causeway’, located on the North Antrim coast is Northern Ireland’s top tourist attraction. Before the Covid-19 pandemic, the Giant’s Causeway attracted more than one million visitors annually and welcomed people from over 160 countries across the world. The UKNC report finds that in 2017, the Giant’s Causeway helped generate over £480 million for the Causeway Coast and Glens region profiting from tourism expenditure on accommodation, food and drink, shopping and transport all in the local area. The UKNC report also states that the Giant’s Causeway is one of the main employers in the area with, pre-Covid-19, 75 full-time staff, increasing significantly during peak season. Together with a contribution of £3.5 million in wages to local people and over 80 per cent of the arts and crafts for sale in the Visitor Centre being produced locally or from within the island of Ireland, the economic benefits of this geology-based tourist attraction are easily demonstrated. 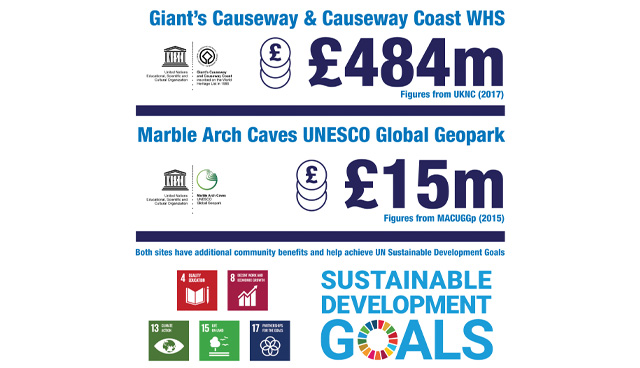 The Marble Arch Caves UNESCO Global Geopark encompasses an area of land which crosses the border between counties Fermanagh in Northern Ireland and Cavan in the Republic of Ireland and was the first cross-border Geopark anywhere in the world. The Geopark is used as a catalyst for sustainable development in the region and according to figures from the Marble Arch Caves UNESCO Global Geopark attracts over 400,000 visitors annually to its numerous sites and recreational facilities, generating an estimated £15 million in total for the local economies in Fermanagh and Cavan.

Geoparks are dedicated to telling the story of the earth through their unique natural, cultural and geological heritage, which in the case of the Marble Arch Caves UNESCO Global Geopark straddles the border between Northern Ireland and the Republic of Ireland. Cross-border education therefore plays a vital role in outreach and engagement programmes with earth science education playing a particularly large part. The UKNC reports that over 1,000 school pupils take part in annual Science Week workshops, helping to forge strong links with schools, local businesses, and other organisations to ensure benefits for not only visitors to the area, but also for those that live and work there.

The geology of Northern Ireland is quite literally the foundation of many of our other tourist destinations that have not been necessarily designated by UNESCO; the Mourne Mountains and Ring of Gullion, the shores of Strangford Lough, the Antrim Coast Road, Carrick-a-rede, and the Gobbins are just some in a very long list. Many of these locations not only have significant financial benefits for local communities, but they also have strong educational, cultural and social benefits as well. What the UNESCO report has done is try to quantify some of these benefits and highlighted the importance of our special sites.

GSNI currently chairs the UK Committee for UNESCO Global Geoparks and works closely with the UKNC to support and promote new and aspiring UNESCO Global Geoparks and to raise awareness of their benefits. In addition, GSNI was part of the team that set up the Marble Arch Caves UNESCO Global Geopark in 2001, it still acts as Scientific Adviser through the Geopark Management Team, and sits on the Giant’s Causeway and Causeway Coast WHS Steering Group providing advice and guidance on geological tourism, conservation and promotion. Through this work, GSNI ensures that our geological heritage receives the international recognition that it deserves, and that it is used sustainably as a driver for tourism.

The report from the UKNC indicates that the Giant’s Causeway and Causeway Coast World Heritage Site and the Marble Arch Caves UNESCO Global Geopark generate almost £500 million for the Northern Ireland economy annually. At the same time, they both contribute to the delivery of the UN Sustainable Development Goals.

It is hoped that the results of this research will encourage a much greater appreciation of the role that geology has to play in sustainable tourism in Northern Ireland. The report has demonstrated the significant financial benefits that geology-based tourism destinations can have and the wider environmental and cultural benefits they can bring for their local communities. The report will also provide a better understanding of the potential of UNESCO projects and in particular, the role they must play in building a greener, and more sustainable Northern Ireland. 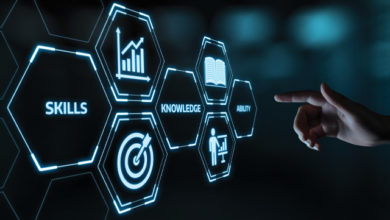