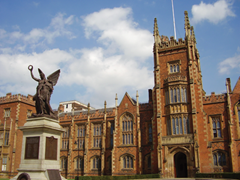 The decision not to increase tuition fees for local undergraduates will not be replicated for students from England, Scotland or Wales who are considering studying here. Meadhbh Monahan reports.

The Department for Employment and Learning will contribute £41.5 million. This will be matched by the Executive by ‘top-slicing’ the budgets of eight other departments (health, education and justice are exempt). Overall, DEL must save £150 million by 2015, when previous budgetary commitments are factored in. This will be done through better estate management, controlling staff vacancies and travel and subsistence, according to Employment and Learning Minister Stephen Farry. In practice, this means managing vacancies as they arise, leaving posts unfilled and less office accommodation.

Students from Northern Ireland will be more inclined to study here as opposed to the rest of the UK now that student fees won’t be increased. The number of students from Great Britain studying in the province (1,530 in 2009-2010) is expected to decrease because they will not be eligible for that fee. Instead, they will be charged up to £9,000.

Parliament voted in December 2010 to allow English universities to increase their fees from £3,375 to up to £9,000. This was in response to the economic crisis and a review of higher education funding by former BP Chief Executive Lord Browne.

In spring this year, English, Scottish and Welsh universities announced how much they would charge students entering from September 2012. However, the Executive only announced its decision on 12 September; UCAS applications for 2012 entry were due to begin in mid- September.

Alliance had prepared for the prospect of increasing fees by stating in its manifesto that it would resist increases to the levels in place in England. However, the decision was essentially taken out of its hands by the DUP, which continued to oppose an increase in tuition fees and Sinn Féin, which pledged to block any attempts to increase fees.

The Scottish Parliament decided to retain free fees for Scottish students and Welsh students will pay fees up to £4,000 but their universities will charge up to £9,000 for others.

Students from other EU countries (including those from the Republic) can’t be charged any more than local students in each jurisdiction due to the EU Directive on the free movement of citizens within member states.

Students from Northern Ireland studying in the Republic are subject to the €2,000 registration fee and this is paid for by DEL.

The consensus in the Assembly is that keeping fees at £3,465 will ensure participation from students from poorer backgrounds and that the future workforce will be up-skilled. The UUP and DUP have clashed, with the former accusing the latter of parochialism by protecting local students at the expense of other UK students, which could weaken the union. DUP MLA David McIlveen claimed that this was “a good deal” for local students, who otherwise would have been “saddled” with excessive debt after leaving university.

Farry contended that he wanted to “protect the market for local students” by avoiding a flood of English, Welsh and Scottish students. Losing the opportunity to upskill local graduates and encourage them to work in the Northern Ireland economy would have been “absolutely catastrophic,” according to the Minister.

An English public interest lawyer is brining a legal challenge against the Scottish Parliament, claiming that its decision to charge UK students while Scottish and European students get free fees is discriminatory. When questioned about whether he has taken legal advice on this anomaly, the Minister said he has been assured that DEL’s actions are legal. The department does not expect a large influx of students from the outside the UK because their fees are largely paid for by their governments.

Farry assured the Employment and Learning Committee on 14 September that the £40 million funding gap in 2014- 2015 will be met. When pressed by Jim Allister, the department’s Permanent Secretary, Alan Shannon, conceded that the overall shortfall from 2012-2015 is £85 million.

The Minister explained that “the reason why we talked about a gap of £40 million is, in many respects, about trying to explain the gap as simply as possible.” As students will enter university in 2012- 2013 and work their way through, “the pressure will build up over the next three years.”

He added: “That £40 million pressure, in essence, will roll forward through the system as a recurring pressure.”

If these cuts had not been agreed, the shortfall would have been left to the universities, resulting in further staff cuts and course closures.

Savings made following a review of education maintenance allowance are expected to between £4 million and £5 million.

Future student flows will highlight the impact this decision has had. The department will continue to fund loans for local students who wish to study in Britain but this could be reviewed in the future.

Queen’s Pro-Vice Chancellor Tony Gallagher has welcomed the freeze as a “spectacular success.” He said the university will have certainty for the next number of years and can get on with plans to provide “a quality student experience and make the best possible contribution to the economy of Northern Ireland.”

University of Ulster Vice-Chancellor Richard Barnett also welcomed the decision, saying: “This is leadership. Let’s be clear, if we had direct rule our students would now be facing fees here of up to £9,000.”

He also called for the Minister to “make a positive announcement” on the university’s bid to replace its Magee campus in Derry, considering the expected high demand for places.