agendaNi profiles the EU’s new trade negotiator, Ireland’s Phil Hogan, a move seen as a clear indication that the border will continue to be prioritised in any future trade deal between the EU and the UK.

Hogan’s remit is not solely Brexit-focussed, however, there is no doubt that the future relationship with the UK will continue to be the main body of work for many years to come. Similarly, there is little doubt that Hogan’s appointment was a politically calculated move, emphasising the message to the UK that the EU’s solidarity with Ireland remains strong.

Hogan, a Kilkenny native and former auctioneer, will hold the brief for the next five years, a move even Taoiseach Leo Varadkar did not shy away from calling a “definite advantage”. In fact, Hogan has publicly credited his attaining of the portfolio to lobbying by Varadkar of incoming Commission President Ursula von der Leyen.

‘Big Phil’ as he is known by many, carried with him a reputation as a ‘bruiser’ when nominated to the European Commission in 2014 to take on the agriculture and rural development portfolio, thanks in large part to the role he played in sustaining former Taoiseach Enda Kenny’s position as leader of Fine Gael.

However, it is the ‘wily negotiator’ label often attached to the former TD which has blossomed in Europe. Hogan is well liked in Brussels, evidenced by a recognised strong relationship with outgoing President Jean Claude Juncker. His known ability to network and build relationships stretches throughout his long political career which began as a local county councillor at the age of 22.

After an unsuccessful attempt to enter the Dáil in the 1987 General Election, Hogan entered Seanad Éireann and served for two years before being elected to the lower house in 1989 for Fine Gael who were then in opposition.

In 2002, he contested for leadership of the party following the resignation of Michael Noonan but conceded to Enda Kenny. He led the election campaign for Fine Gael in 2011, the most successful in the party’s history and was rewarded by an appointment to Minister for the Environment, Community and Local Government. 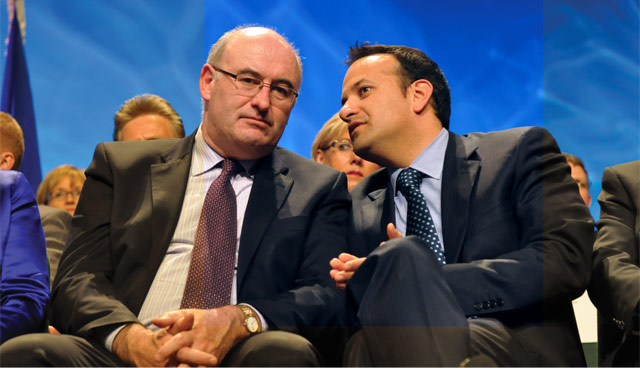 Hogan’s stint as Minister included progressive policies such as local government reform and gender quotas for the political system, however, he is widely regarded as the face of attempts to introduce property taxes and water charges as part of an extreme programme of austerity rolled out by the Government. Such was the backlash to increased taxes, Taoiseach Enda Kenny saw fit to remove Hogan from the firing line and he was appointed as an EU commissioner.

The role has enabled him to become a significant player in the EU. Hogan was a key player in both the EU-Mercosur and EU-Japan talks, two of the largest trade deals that the EU has ever negotiated. His deal with the Mercosur states, finalised in July, again saw criticism levelled at Hogan from within Ireland and by European farmers who believe that the opening up to meat imports could have a detrimental impact on local markets, as well as environmental and welfare standards.

In his role of Agriculture Commissioner, Hogan was a vocal opponent to the UK’s approach to Brexit, which dominated his work to reform the Common Agricultural Policy. His new portfolio of trade is one of the most sought-after positions in Europe and Hogan will be responsible for representing the EU at the WTO. Hogan will not directly head up negotiations with the UK after Brexit but will be heavily influential in the process.

While some have argued that his appointment is a warning shot at the UK, others believe that Prime Minister Boris Johnson could read it as a positive, given Ireland’s repeated desire to continue being the UK’s strongest trading partner in the event of any Brexit outcome.

If Hogan held the trade post as an aspiration in the recent past, he didn’t allow such aspiration to soften his outlook on Brexit or the UK’s latest Prime Minister.

Recently describing the “foul atmosphere” that would be created if the UK fails to prevent a crash-out Brexit “and the serious consequences this will have for negotiating any future trade agreement”. Hogan added: “The UK Government’s only Churchillian legacy will be ‘never have so few done so much damage to so many’.”

Hogan was also noted as labelling Boris Johnson as one of “three stooges” and highlighted his position as an “unelected Prime Minister”.

Tough talk is likely going to have to be a weapon Hogan will need to deploy regularly given that another priority of his will be to reduce the EU-US trade tensions. Hogan has pledged to engage in some “ground hurling” with US President Donald Trump in an attempt to steer him away from a perceived preference for “trade wars rather than trade agreements”.

Brexit and the environment