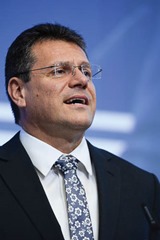 Šefčovič stated that he was launching “the most ambitious European energy project since the Coal and Steel Community, a project that will integrate our 28 European energy markets into one energy union.”

The Commission intends to move the EU away from its status as the largest energy importer in the world (53 per cent of its energy at an annual cost of approximately €400 billion). It also aims to facilitate the free flow of gas and electricity across EU borders. These efforts are partly aimed at reducing Russian dominance of European gas supplies.

The Commission wants to see further increases in energy efficiency, a reduction in greenhouse gas emissions (down by 40 per cent in 2030 compared to 1990), and the establishment of a technological lead in alternative energies. Consumers should have more choice among energy suppliers and reduced prices.

However, there are significant obstacles to the creation of a single energy market. Energy supplies are disproportionally spread across Europe. A lack of adequately integrated infrastructure and the absence of a single European grid all complicate the Commission’s proposals. For instance, France obtains the bulk of its energy supply from nuclear reactors within the country while North Sea oil and gas reserves are mainly accessible to Britain and non-EU Norway. Balancing the interests of 28 member states is expected to be difficult.