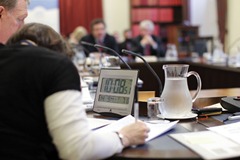 agendaNi reviews the Employment and Learning Committee’s work to date.

Tuition fees, a higher education strategy, the proposed merger of Stranmillis College with Queen’s University and the consultation on widening participation in higher education focused members’ attention over the past three months.

Other issues included workers’ rights, the impact of welfare reforms and proposals that new essential skills tutors must have a degree qualification.

Committee Chair Basil McCrea tabled an Assembly debate on tuition fees on 28 June. Time was running out, he said, and students needed clarity in order to make informed choices regarding university applications for the 2012 academic year. The Assembly resolved to “ensure that funding is available to maintain the excellence of Northern Ireland’s higher education system and is consistent with our aim of maximising educational opportunities for all.”

On the proposed merger of Stranmillis College with Queen’s University, Jim Allister referred to consultation responses which highlighted a concern that “once Stranmillis becomes an integral part of Queen’s, its [Christian] ethos cannot be protected; nor can it be compatible with the ethos of Queen’s University.” He was told that an advisory board is to examine the issue, which he described as “window dressing.”

Barry McElduff queried how much poor broadband in rural areas affects widening participation and was told that DEL was not specifically involved in that. Basil McCrea told Fergus Devitt, the Head of DEL’s Higher Education Division, to get to the root of the participation problem by targeting children from a young age.

“Perhaps for cultural or historic reasons, there is an almost anti-educational stance from some sections about why people would want to go into further education,” he said.

The EU Agency Worker Directive will grant temporary agency workers the right to the same pay, holidays and other basic working conditions as directly recruited staff after 12 weeks. It came into effect on 1 October.

A review of education maintenance allowance which costs around £26 million per year is underway. The criteria for applicants could be changed thereby freeing up a proportion that would go towards plugging the funding shortfall caused by freezing tuition fees.

A briefing from the Minister on 8 June informed the committee of a “major crisis” in the employment service. Farry said that the current number of staff is based on a claimant count of 35,000 but were now 60,000 people on benefits. Welfare reform will see approximately 20,000 people switch from incapacity benefit to job seeker’s allowance, putting more pressure on staff.

“At present, the department is not resourced, nor will it receive additional resources, to meet that demand,” the Minister told the committee. “There is parity across the UK in provision for benefits. However, a major challenge is looming in our ability to maintain parity in the level of service that we can provide.”