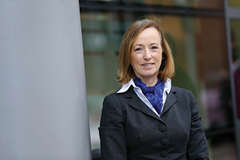 Northern Ireland Law Commission Chief Executive  Judena Goldring outlines the practical aspects of how good governance can be embedded in an organisation’s culture.

Good governance is a concept that has come into regular use in both politics and public administration.
Northern Ireland is a society that has experienced deep social and political dysfunction with a consequentially impaired economy.  We are in the process of building a peaceful, high functioning democracy and our aspiration is for a more balanced, modern economy.  Good governance within our political bodies, public institutions and civic, voluntary and private sector organisations is a fundamental requisite for our successful transition.

Over recent years we have seen the damage wrought by poor institutional governance.  Large corporate institutions have fallen apart in the current economic crisis.  The very public failures in a number of Northern Ireland quangos and, further afield, MPs’ expenses, board room bonuses and executive pay in the private and public sectors, have all attracted public criticism.

In its narrow sense, public sector or corporate governance is about how an organisation is directed and controlled.  It is about the structures and processes in place to monitor and facilitate effective management of an organisation, including mechanisms to ensure legal compliance and prevent improper or unlawful behaviour.

There are certain assumptions about what are sometimes called the ‘hard’ requirements for good corporate governance e.g. the separation of the roles of Chair and CEO, a majority of non-executive or independent directors on the board, and linking CEO rewards to performance.

However, good governance is now increasingly defined as the full set of relationships amongst an organisation’s management, its board and its stakeholders.  It provides the structure through which the objectives of the organisation are set, and the means of attaining those objectives and monitoring performance.  This is a much more whole-organisation and outward-looking approach, sometimes referred to as a horizontal approach to governance.

For the public sector body, this includes a greater involvement of a wider range of stakeholders and ultimately the citizen.  Some of the horizontal or ‘soft’ governance characteristics are: clarity in the roles and responsibilities and relationships between CEO and Chair, directors and management, and directors and stakeholders, and a culture of trust and open dissent.

The relationship between executives and their governing bodies is central to good governance.  Successful organisations have respectful, clear and well-understood relationships between the executive and non-executive arms.

Serious internal organisational failures are due, at least in part, to a breakdown in this relationship.

The Chartered Institute of Public Finance and Accountancy (CIPFA) Guide and Department of Finance and Personnel good practice propose that non-departmental public body boards publish schemes of delegations defining where board responsibilities stop and start, and where a CEO’s responsibilities start and stop.

The governing body sets policies as parameters within which the executive works on the behalf of the governing body.  For this to work well, it is important that governors do not concern themselves with levels of detail that are inappropriate for their role, while at the same time ensuring that they are not too far removed to provide effective oversight and scrutiny.

Although chairmanship of a public body may have no particular legal status, it is almost universally recognised as being of critical importance, as is the centrality of the Chair-Chief Executive relationship.  There should be a mutual recognition that the Chair and CEO share authority within the organisation.  Generally, the most successful relationships are those where the Chair’s responsibility to hold the CEO to account is balanced by the Chair’s ability to provide a supportive, even mentoring, role to the CEO.

Mutual trust and respect should, therefore, be the expectation and indeed the responsibility of both board members and the executive.  They should consciously work together towards building these behaviours and attitudes and where problems exist, they should be addressed early on.

One behaviour builds on another to form a kind of virtuous circle: good team work, based on agreed roles and responsibilities, aids the development of mutual respect from which comes more trusting relationships.

Appropriate and accurate information flows are necessary for good decision-making.  Boards that involve themselves in executive delegated matters are prone to take their eye of what should be their main focus: effective leadership, strategic direction, support and guidance.
Involvement in delegated matters invariably leads the board to seek the wrong kind of information and members can be swamped with unnecessary detail from which it is difficult to develop a strategic view.  Similarly where the CEO fails to understand or promote the governing or strategic role of the board, a defensive attitude to information flows can develop.
Where board members and the executive have clearly agreed roles and responsibilities, they will be in a better position to respectively seek and provide the right kind of information.  And with the appropriate level of information flows, board members and the executive can trust each other’s conclusions.

Trusting and respectful relationships allow board members and the executive to positively challenge each other’s assumptions and beliefs.  A culture of positive challenge and capacity to persuade is very important if organisations are to fully utilise the diversity of skills and knowledge available to it at board and executive level.

Such a culture at board level and between board and the executive creates an organisation based on openness and honesty.  Accountability and transparency at board and executive level is essential to developing these characteristics throughout the organisation.

Appraisal reinforces responsibility and a well governed organisation requires its board members to be accountable for their areas of responsibility.  Appraisal is not a skill that it can be assumed that all chairs or board members immediately possess so there should be robust appraisal processes supported by board training.

In an organisation where there is an understanding of internal roles and responsibilities, a non-defensive attitude to information seeking and sharing can be developed.  In this kind of an organisational culture, there is more likely to be a non-defensive attitude to external information flows.  An external focus on service user and public needs is an important aspect of horizontal type governance.  An open, non-defensive and honest approach produces greater ownership among stakeholders.  This is the avowed objective of modern, participatory government.

Judena Goldring was appointed as the Northern Ireland Law Commission’s first Chief Executive in August 2007.  The commission was proposed in the Criminal Justice Review and its main task is to review areas of the law and to make recommendations for reform.  Judena graduated in history from Trinity College Dublin and law from Queen’s University Belfast. She was admitted as a solicitor in Northern Ireland in 1987 and joined the Office of Law Reform in 1990.  She was appointed Director of Law Reform in 1994 and worked within the Senior Civil Service between 2000 and 2007.  Her posts included Director of Environmental Policy in the DoE and Director for the Review of Public Administration within DCAL.