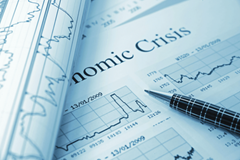 Ministers realise that their projects won’t go ahead without approval from the Department of Finance and Personnel (DFP) and are therefore turning to economists for economic research, briefings and policy development, rather than just cost-benefit and appraisal analysis.

One hundred economists make up the Northern Ireland Government Economic Service. They are employed as DFP civil servants and are seconded out to the other departments, retaining their DFP status.

The main role of the professional economist is to advise and challenge ministers and senior officials on the projects or policies they want to bring forward.

Due to Northern Ireland’s public expenditure being 20 per cent higher than the UK average in per capita terms* the influence of what the Executive does with its public expenditure is pervasive across the whole of the Northern Ireland economy, the audience heard. The province’s fiscal deficit increased from £6.5 billion in 2007-2008 to £9 billion in 2008-2009. This is due to fewer taxes being collected and the Executive expects that the situation will get worse.

Economists enter the economic service as assistant economists (£27,115- £30,520). Entry requirements are a 2:1 honours degree in economics, preferably with two years’ experience. The next grade is deputy economists (£34,163- £38,893). Promotions to this grade usually occur four to five years after entry.

Principal economists (£44,796-£50,796) head up each department and promotion to that grade usually takes five to six years. Promotions to senior principal economists (£52,127-£62,407) occur occasionally via internal promotion. The recruitment, promotion and development of economists is managed centrally by the Chief Economist (£57,300-£116,000). The service recruits approximately 10 economists per year and secondments and training programmes are available.

The guidance adhered to by the service is contained in the Northern Ireland Guide to Expenditure Appraisal and Evaluation and is considered to be more robust and rigorous than in the rest of the UK, according to the speaker.

The Treasury and Department for Work and Pensions are discussing the possibility of updating the Green Book (Treasury’s appraisal and evaluation guidance to central government) to include a ‘subjective well-being’ approach to the valuation of non-market impacts. This would be used along with the current policy of measuring revealed and stated preferences (market-based approaches). It is felt that the full value of health, community stability, educational success and environmental assets should be considered in the valuation process. This is already underway in Northern Ireland on a non-monetary basis.

policy or a project the department is taking forward. In this case the Chief Economist liaises with the Permanent Secretary and the problem is generally solved.

A high profile example was the regeneration of the Maze/Long Kesh site. Different departments sought to use the site for a number of projects such as a multi-sports stadium, an international centre for conflict transformation, a ‘rural excellence and equestrian zone’, an employment zone and social housing.

Disputes over whether the project would be on-sheet or off-sheet (i.e. the Executive would not have to provide the capital expenditure to cover it) could not be solved. Different economic impact assessments were put forward and political sensitivities surrounded the concept of a shared future, as understood by different parties. In addition, the estimated net present cost ranged from £193 million to £254 million without accounting for ‘non-monetised’ costs.

Ultimately, the Chief Economist was tasked to “form a view” of the way forward. He concluded: “A value for money economic case for proceeding [had] not been clearly demonstrated.”

Overall, economists will put forward the value for money case, which won’t always reflect political ambitions. They can find it “unsettling” to be subjected to political buffeting but have found that ministers generally accept the economic realities when pressed.