With the UK shaping up to compromise on a deal that would see Northern Ireland remain within the EU customs area, the DUP may be left regretting the level of support they have given new Prime Minister Boris Johnson’s Brexit vision, writes David Whelan.

In early October, Prime Minister Boris Johnson sent to Brussels renewed plans for a deal that he hoped would end the current deadlock. The plans, as expected, were a fudge of the May deal and attempted to side step the inevitable necessity of a hard border in Northern Ireland if full UK alignment was to be guaranteed.

Johnson’s proposals were dismissed almost as quickly as they were mooted, not only by the EU but by business, economic stakeholders and wider society in Northern Ireland given that the arrangements would see the erection of a border to trade on the island and in the Irish Sea.

Surprisingly, the DUP fell in behind the proposals, more than likely realising that they risked being seen as the drivers of a crash-out Brexit on 31 October. Whether the UK Government or the DUP ever truly believed the proposals would pass is unclear, however, what is clear is that the DUP had softened on their rejection of an Irish Sea border, the very issue which brought Theresa May’s premiership to an end.

The DUP’s support for Johnson pre-dates May’s efforts to get a Brexit deal. His “junk the backstop” appearance at their annual conference last year was well received and since then they have put faith in him to do right by them with regards to Brexit.

So much so that following the reveal of the plans, the DUP joined a chorus of Johnson supporters, including Northern Ireland’s Secretary of State, in proclaiming the proposed deal as a good one and a clear sign of intent from the UK Government. Such support completely failed to recognise an even bigger chorus from across Ireland which recognised the clear impediment to the Good Friday Agreement and the restrictions to trade and travel it would have.

Despite the rejection from the Irish Government and the wider EU, a fresh twist in the Brexit saga emerged when, following further talks, Johnson and Taoiseach Leo Varadkar released a joint statement declaring a vision for a “pathway” to an agreement.

That pathway looks set to place the DUP in an impossible position. It’s been touted, although no formal arrangements have been published, that a re-hashed version of the withdrawal agreement would see Northern Ireland remain in the UK customs territory legally, benefiting from any free trade deals struck with third countries but remaining as part of the UK customs area. Such a deal would look remarkably like the one May had rejected by the DUP initially, not surprising given that May’s deal was one negotiated thoroughly by UK officials. Such was the little room to manoeuvre for both sides, Johnson himself supported a version (full UK customs alignment) of May’s original proposals, albeit at the third time of asking.

If such a deal is agreed, then the DUP face the unenviable position of either rejecting it and potentially driving a no deal Brexit to the distaste of the majority in the UK or accepting it and facing a backlash at home for reneging on their ‘blood red line’.

The current scenario is what many commentators have been outlining for quite some time, that Brexit is an existential threat to the UK. While many chose to interpret this as meaning the potential favourability of a united Ireland increasing, more poignant was the fact that at some stage the UK Government were going to have to choose between appeasing the DUP and compromising with the EU if they wanted to secure a deal. 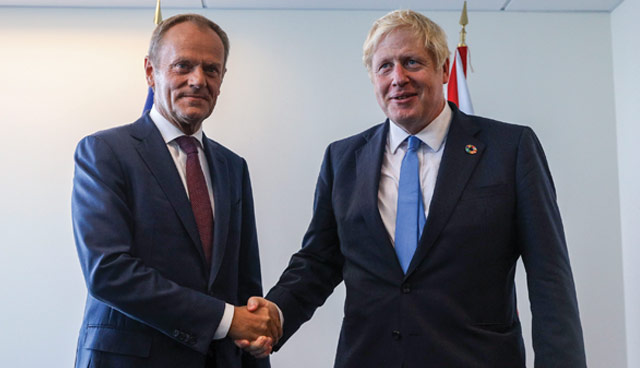 Ironically, the Brexit which the DUP campaigned for and funded advertising for in the UK, now looks set to diminish the level of UK alignment which they felt comfortable with. Records will show that the DUP advocated for a deal — they have repeated such a desire many times in the media — however, none of their actions to date represent this. The DUP errored when they themselves painted customs checks in the Irish Sea as an existential threat, rather than as a resolvable technical issue. However, by compromising on Johnson’s initial plans, the party opened the door to further compromise and are now stranded with no safe ground in site.

A further irony is that in contrast to the looming possibility of a no deal exit, alignment with both the UK and the EU, with the UK outside of the European Union, could potentially bring about an economic windfall for Northern Ireland and make it a major attraction for Foreign Direct Investment (FDI).

Would the DUP risk the UK’s last-ditch attempt for a deal before an inevitable hard crash-out for the sake of full regulatory alignment? In short, yes, however, they will also be aware their power in Westminster may not be what it once was under May’s tenure. If pressing ahead with such a deal, Johnson’s team will be confident in their number crunching that they can attract enough exiled Tories, Labour MPs and Liberal Democrats to get a deal through Parliament.

That might be seen as the reason behind the DUP’s guarded response to the latest rumoured proposals. The party stated that it would judge a deal on its impact to Northern Ireland’s long-term economic and constitutional interests, but did not comment on the Irish Sea customs plans.

Another sign that their power might be waning is the evident softening of hardline Brexiteer MPs to a deal. Jacob Rees-Mogg, leading Eurosceptic and ally to the DUP throughout the Brexit process was quoted in the Financial Times urging colleagues that “compromise will inevitably be needed”. The MP went on to say that he might be forced to “eat my own words” with regard to the criticism he previously levelled at the idea of a customs partnership.

Johnson has repeated his threat to take the UK out of the EU without a deal if conditions are not favourable, even though Parliament has already voted to force a delay to Brexit in those circumstances. At the time of going to print both the UK and the EU remain engaged in discussions prior to the summit on the 17th and 18th October and the outline of a deal, if any, will be clearer by next week. What is clear is that the economic and constitutional future of Northern Ireland lies more in the hands of Johnson in the coming weeks than it does in those of the DUP.