Northern Ireland’s local government elections resulted in mixed fortunes, including a rise in UUP support and decreases for the DUP, Sinn Féin and SDLP. Several smaller parties made breakthroughs and the new councils will reflect the full range of political opinions in the province.

The DUP and Sinn Féin have, as expected, emerged as the two largest parties on the new councils but their dominance has been challenged by the rise of right-wing unionists, a resilient Alliance vote and a mini-revival for the UUP.

Widespread boundary changes and the reduction in the number of seats (from 582 to 462) mean that it is harder to compare this election’s results with those from previous polls. The new councillors will also have to wait until next April before taking up their new roles.

A 52 per cent turnout compared well with the 54 per cent achieved in the 2011 election. Turnout was highest in Fermanagh and Omagh (61 per cent) but lowest in North Down and Ards (42 per cent). In much of the greater Belfast area, the majority of voters stayed at home.

Sinn Féin topped a local government poll for the first time although its vote share dipped slightly. It dominated rural councils west of the Bann and is now the largest party in both capital cities on the island. The party overtook the SDLP in Derry but was evenly matched with its main rival in Newry, Mourne and Down. The arrest of Gerry Adams appeared to make little or no impact on the party’s performance. Its share of the nationalist vote rose from 61 to 63 per cent, yielding 105 seats.

The party’s candidates made substantial gains in the Republic, benefitting from resentment against austerity. Sinn Féin returned just 54 councillors at the last election for southern councils, in 2009, but surged to 157 councillors this time round.

The DUP received the largest number of seats in Northern Ireland and came close to an overall majority in Lisburn and Castlereagh. Other good performances included Mid and East Antrim and North Down and Ards. The party, though, only had a slim lead over the UUP in five councils: Antrim and Newtownabbey; Armagh, Banbridge and Craigavon; Causeway Coast and Glens; Mid Ulster; and Newry, Mourne and Down. Peter Robinson’s embrace of Gavin Robinson and Ruth Patterson in Belfast summed up the party’s hopes of maintaining a wide support base. The party’s share of the unionist vote decreased from 59 per cent in 2011 to 48 per cent in 2014.

Ulster Unionists celebrated their best result in 25 years although the rise in their vote (0.9 per cent) was relatively small. The party is now the largest unionist group in Fermanagh and Omagh – heartland of former leader Tom Elliott – and doubled its representation in Belfast. 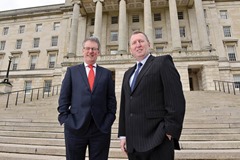 Its continued ‘broad church’ nature may lead to divisions over policy. Sonia Copeland, for example, is a strong opponent of welfare reform but other party members (such as Reg Empey) are in favour.

The party’s share of the unionist vote was unchanged at 33 per cent but Mike Nesbitt appeared to attract voters in the greater Belfast area who had fallen away from the UUP in recent years.

Alasdair McDonnell’s first province-wide election as SDLP leader disappointed many members. The party’s support bases in Derry and Down were merged with strong Sinn Féin areas in Strabane and Newry respectively. The party was squeezed in many areas, including West Belfast, and fell short of McDonnell’s own target of 70-80 seats. Its share of the nationalist vote fell from 38 to 36 per cent. On the positive side, the SDLP is the only nationalist party with representatives in all 11 councils. Alliance lost some support in East Belfast due to the flag protests but the backlash was much smaller than that predicted by its unionist rivals. It continues to hold the balance of power at City Hall and is still the third largest party in the city and its surrounding districts, often just behind the UUP. The party lost representatives in Craigavon, Coleraine, Banbridge and Ballymena but gained ground in Lisburn and Saintfield. It was particularly pleased to gain a seat in Castle – a mixed area of North Belfast – for the first time since 2001.

The Greens fulfilled their ambition of a City Hall seat while consolidating their support in North Down with three seats. Their southern counterparts recovered from the severe losses experienced in 2009, winning 13 seats.

The TUV broke through in the County Antrim councils and gained its first seat in Belfast. It sees its good results in Bannside, where Ian Paisley’s career began, as a particular success story and secured almost a tenth (9 per cent) of unionist votes. The PUP quadrupled its vote share, mostly in Belfast, with leader Billy Hutchinson winning a seat on the Shankill Road. 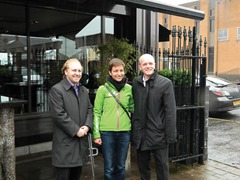 UKIP tapped into the hard-line unionist vote and its three seats were scattered between Portadown, Carrickfergus and Kilkeel. Johnny McCarthy became NI21’s only shadow councillor after its troubled campaign and the party could have gained more seats through better vote management.

The sole Conservative councillor, Brian Dunn in Larne, stood down before the poll and the party failed to win any seats.

The election of Gary Donnelly in Derry demonstrates that dissident republicans have a small support base and his presence on the council will be uncomfortable for Sinn Féin.

The flags dispute and a greater variety of unionist candidates increased unionism’s share of the vote from 46 to 50 per cent. The nationalist share dipped from 40 to 38 per cent and the same trend affected the cross-community parties: down from 10 to 8 per cent. Despite the odds stacked against independents in larger councils, their share only decreased from 5 to 4 per cent and 15 were returned.

There is some overlap between the 582 sitting councillors and the 462 shadow councillors. The councillors who were elected in 2011 (or co-opted since then) will be the official representatives of their areas until they leave office on 31 March next year.

The new shadow councils will hold their first meetings in June and the location of their headquarters will be one the main issues to be decided in their first few months.