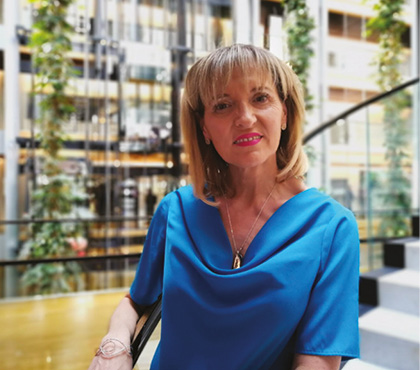 Sinn Féin MEP Martina Anderson talks to David Whelan about the hurdles that still have to be overcome in phase two of the Brexit negotiations and her role in ensuring the rights guaranteed by the Good Friday Agreement are upheld.

The fact that the EU have demanded a legal framework for the terms agreed by its negotiating team and the UK in order to move through to phase two comes to no surprise to MEP Martina Anderson. The former Junior Minister to Martin McGuinness was quick to issue a warning to EU negotiators Michel Barnier and Guy Verhofstadt on the cusp of the phase one settlement, not to accept the British Government at its word. “No one knows the British and their negotiation strategy like we do,” she says. “They start with the bottom line of what has been agreed and work downwards.”

Anderson states that for this reason the European Parliament’s resolution was carefully worded, outlining that there would not be a move into phase two unless there was a legal agreement on what commitments had been undertaken.

She is confident this legal translation can take place by the March deadline, provided there is political will and believes that the EU took decisive action to ensure clarity on any “contradictory statements” made by British government representatives following the phase one agreement.

Referring specifically to the statements made by Brexit Secretary David Davis that the agreement was a ‘statement of intent without legal backing’, Anderson says: “The Parliament have made it very clear that the British Government cannot have an á la carte approach to the EU and that as a non-member, it cannot have more favourable or equal benefits, as members. If the British Government want, for example, financial services in London to access the single market, then they need a Norway-type agreement, which means accepting the four freedoms and regulatory standards. If it’s a Canada model they desire, away from the four freedoms, then they need to understand that they can’t operate in the single market.”

Anderson believes that trade policy will be one of the major challenges determining whether an agreement at the end of phase two can be reached. However, prior to that, she suggests that even transition could be testing times for Britain.

“During transition, Britain are going to lose their ability to opt-out of certain EU policies, something which they currently have the power to do. Britain will now have to comply with all that has been agreed within the EU in its totality. That means that regulations made without their input will apply to Britain during the transition phase.

“A further element of this is the ability to agree trade deals. Britain has made it clear that it wants to go out and trade with the rest of the world. However, it will be unable to enter a bi-lateral trade agreement while in transition and any sign off can’t be completed until the full conclusion of Brexit.”

While highlighting the pitfalls of leaving the EU, Anderson is under no illusion that Britain is leaving. “Once Article 50 was triggered it was clear that Britain was leaving the EU. In Brussels, there is already preparatory work underway to organise the make up the Parliament once Britain is removed. For us, it is important to capture the genuine good will that exists for the case of ‘special status’ for the North, or whatever one wants to call it.”

Anderson has been hard at work lobbying in Brussels and highlighting the unique circumstances of Ireland, both north and south. Describing herself as being the only MEP in the North who has been challenging Brexit since the referendum, she outlines that such a role was even more fundamental in the absence of an Executive.

“Right from the off we were mindful of the fact that whether an Executive was up and running or not, the DUP had pledged to support the position of the British Government. I believe that the DUP backed Brexit for ideological reasons, to harden the border in Ireland. Given that they failed to support the North remaining in the single market and customs union, and that they have never supported the Good Friday Agreement, there was never going to be a meeting of minds on Brexit.

“I have presented the case for designated status, backed up with solid legal advice that shows it to be both permissible and deliverable. Up until recently there was a general perception among MEPs that the Good Friday Agreement was a peace accord, a handshake. In 2017, I spent from April until October knocking on doors and walking MEPs through the Good Friday Agreement in all of its parts, so that they understood the importance of regulatory alignment across the island.”

Following the initial announcement of phase one, some ambiguity existed as to whether what had been agreed for the island would hold, even if Britain crashed out without a deal. However, Anderson clarifies that a move to WTO for Britain would mean a hard border in Ireland and stresses the need for further impetus in creating special arrangements for the North.

“Europe has been very clear. They will not do anything that is going to damage the island of Ireland, with both the Parliament and the Council stating they would preserve the Good Friday Agreement in all its parts. Those were important words and words that I inserted into the Parliament resolution, before they were adopted by the Council.”

Rejecting cynicism that public opinion may turn against the EU if border infrastructure is to be installed, Anderson says: “The EU has got a territorial scope in which they are going to ensure the integrity of the single market and the customs union is preserved. The British Government cannot, as a co-guarantor of the Good Friday Agreement, take an action by which the implications are going to result in a different regulatory standard here. That’s not going to be accepted and would be irresponsible, reckless and wrong.”

Anderson highlights that concerns of a hard border stretch beyond both economic and security risks to that of citizens’ rights. “The Good Friday Agreement secured that all citizens in the North were EU rights holders. A hard border would mean that we have been dragged out of these protections. To subject a generation to the frustrations of showing passports on the island of Ireland and physical infrastructure on the border is reckless and wrong. Thankfully, Europe understands the potential damage to the peace process a hardening of the border could cause.

“One thing I have been explaining to Parliament is that, whether they hold an Irish passport or not, 1.8 million people have been quoted the right to be British, Irish or both. This means that they have been afforded the right to be an EU rights holder. We made this argument on the basis that, for all citizens, even those that voted to leave, their rights should be upheld. I think the potential consequences of a hard border have enhanced a conversation already taking place on Irish unity and brought it to another level.”

In late 2017, a poll taken by Lucid Talk highlighted that a relative majority of people in the Northern Ireland would vote to remain in the EU through reunification with the Republic in the event of a hard Brexit. Anderson believes that the potential consequences of a hard Brexit are the driving force between a shift in public opinion. It is for this reason that Anderson highlights the value of the ‘German clause’ secured from the Council on 29 April, 2017.

The declaration read that in the event of Irish reunification that the Northern Ireland can automatically become a member of the EU, something that Scotland hasn’t achieved. However, Anderson asserts that it is wrong to suggest that Sinn Féin’s push for special status and approach to Brexit has been solely based on their goal of Irish reunification.

“One thing that I believe was overlooked was that when we presented our case for designated special status: it was done within the context of the Good Friday Agreement and the constitution position as it currently is. It wasn’t Irish unity we were advocating, it was keeping the relationship as it is now and working towards, which we make no apologies for, Irish unity.”

Given the level of importance that Anderson places on Strand Two of the Good Friday Agreement, it is not surprising that she is opposed to any re-drafting of it or initiating a fresh process, as has been suggested by some. “I don’t think it should be tampered with at all. It was hard fought for and there was a lot of pain which people went through to get to where we are at. It created a level-playing field and enabled us all to be equal. The Agreement needs to be built upon and the commitments within it need to be delivered.”

Despite her obvious objection to leaving the EU, Anderson is not beyond criticism of the institutions. “Sinn Féin is critically engaged with the EU. There is a lot about the EU that has to change and we have been very critical of those within the EU who have lost their focus of why it was created – born out of conflict and wars, pioneering rights and equality and creating an EU for the people. However, I know it can change and I believe the way of change is through representation and bringing in a majority of MEPs who are more interested in people than profit.”

As for her own career outside of the EU, Anderson stresses that she has been too busy and will continue to be busy highlighting Ireland’s case to stop and think of it. She has previously advocated that under a special status, the North should retain three MEPS and one option, providing that she has both the party’s and the electorate’s backing, would be to resume her work in Brussels.

“As Martin McGuinness’ Junior Minister I never had any intention of being a representative in Europe but things changed quickly. It highlighted to me that you can never predict what is around the corner. Currently, my personal agenda is not a priority, my focus at this time is in Brussels and whatever the outcome I will remain a Sinn Féin activist.”

Anderson, a member of the Sinn Féin ard chomhairle, will continue to be a party activist under a different President following Gerry Adam’s announcement that he is to step down. She is in no doubt about who she supports top succeed the man she describes as a “giant”.

“Sinn Féin is bursting with talent but I think there is no one as capable of filling the shoes of Gerry Adams as Mary Lou McDonald and taking us forward strategically and politically.”

Sinn Féin MEP Martina Anderson talks to David Whelan about the hurdles that still have to be overcome in phase two of the Brexit negotiations and her role in ensuring the rights guaranteed by the Good Friday Agreement are upheld.

“The British Government cannot say as a co-guarantor of the Good Friday Agreement that we are going to take an action in which we know the implications are going to result in a different regulatory standard here. That’s not going to be accepted and would be irresponsible, reckless and wrong.”