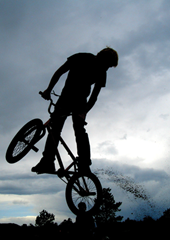 All cyclists would be required to wear helmets on any road or open space, if the Cyclists (Protective Headgear) Bill is enacted. It passed its second stage on 31 January but is unlikely to become law as dissolution is drawing close.

The Bill’s objective is to reduce death and serious injury amongst cyclists. From 2005 to 2010, 422 children and 213 adults were hospitalised in Northern Ireland after cycling accidents.

It was first discussed within the Assembly’s All-Party Group on Road Safety, chaired by Pat Ramsey. Around 20 responses were received during the consultation last spring. Most were in favour but some respondents questioned the evidence and said the Bill could put people off cycling.

Ramsey has therefore allowed its main section to be delayed for three years while the Department of the Environment (DoE) runs a publicity campaign, to encourage helmet-wearing.

The law would be enforced by the police but breaking it would not be a crime. An on-the-spot £50 fine would be served but this could be waived, on the first occasion, if the cyclist bought a new helmet. In the case of children under 16, the fine would be paid by the responsible adult e.g. a parent or carer.

He or she would need to present that helmet and its receipt at a police station within 28 days. Appeals to an adjudicator can be made within 21 days of the notice. Potential costs include running the penalty and appeals processes, and the proposed publicity campaign.

Australia was the first country to make helmet use compulsory, in 1989, followed by New Zealand and several Canadian provinces.

Introducing the Bill, Ramsey described how brain injuries could kill or cause long-term harm. He had no desire to criminalise anyone but wished to improve safety.

Sobering accounts were retold in the Chamber, in a debate which touched also on how the state should regulate personal choices. All participants recorded their sympathy for those injured in road accidents.

Supporters said that legislation sent out a clear message on safety, and recalled how the same objections were made to seatbelt laws. A constable “may issue” a notice, not “shall issue”, Pól Callaghan reminded members.

Objectors warned that, despite its sponsor’s good intentions, the Bill may punish the parents of careless children, irritate teenagers, take up police time and discourage cycling, as some cycling organisations claim. Trevor Lunn, though, predicted that this would not happen, as stubborn Northern Ireland citizens would keep cycling without a helmet.

Perhaps helmets should be sold at the same time as bikes, Cathal Boylan suggested. Alastair Ross said that Dutch and Danish roads were safer, without such a law. Edwin Poots praised existing road safety work and preferred improving the driving test and promoting more cycling in general.

Members narrowly divided 20-18, the ayes having it. The DUP, SDLP and Ulster Unionists allowed a free vote, although all present SDLP MLAs voted in favour. Sinn Féin took a noe line while Alliance supported the Bill on the merits of the debate.

The Environment Committee can consider the Bill up to 14 March. The Bill will fall if it does not receive its final stage before dissolution, at midnight on 24 March. An MLA can introduce the same Bill from scratch in the next mandate.

Aside from its pros and cons, the debate was a cautionary reminder of the risks that everyone takes on as soon as they hit the road.