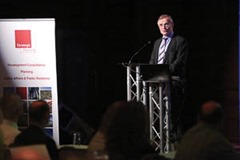 DoE Permanent Secretary Leo O’Reilly has outlined the expected benefits of local government reform and how the department is preparing for the transition to the new councils on 1 April.

The Department of the Environment expects the transition to new councils to be a very challenging experience but one which will also deliver real benefits to communities.

Speaking at agendaNi’s planning seminar, Permanent Secretary Leo O’Reilly explained that this was “an exciting and very challenging time” for local government – the culmination of a long process of reform which started under direct rule. The reform programme’s objectives are to streamline the service provided to the public and make local government more effective, more responsive and more powerful – therefore giving the sector a more strategic and direct role in influencing regeneration and development in communities.

“It will mean significant change for all us,” he commented, “from private individuals submitting planning applications to politicians at regional and local level, businesses locally, regionally [and] internationally, industry, the environment and community interests – as well, of course, for central and local government.”

Despite the challenge, Minister Mark H Durkan and the department were convinced that reform will deliver “wide-ranging” benefits including improved service delivery, better community buy-in to the planning system, the promotion of a shared society, and sustainable economic development.

“It also brings, we believe, planning back to where it really belongs which is squarely in the middle of the local communities, making it more locally accountable,” O’Reilly added. “It also, as we know, brings Northern Ireland frankly back into line with the other jurisdictions throughout Britain and Ireland.”

This change will also help to integrate planning into local economic and social development policies. All the “place-setting” responsibilities for an area will sit with a single local authority rather than with multiple central government departments.

O’Reilly emphasised that the Planning Act 2011, which now receives relatively little attention, will bring a completely new body of planning law into effect in April. It has not been implemented to date as it was based on the assumption that planning would be local government’s responsibility. As a completely new system will then be in place, he expected substantial interest in planning “for several years thereafter.”

The department published the draft Strategic Planning Policy Statement in February 2014 i.e. a new and shorter policy framework which aims to provide greater clarity and certainty. Responses to the public consultation were being considered and a final version was due by the end of the year. The draft statement outlines eight core principles for planning (see box).

7. enhancing stakeholder engagement and front-loading; and 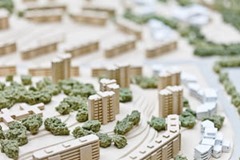 In April 2014, the department published new guidance on pre-application discussions to allow more opportunities to raise and address planning-related issues before an application is submitted.

He commented: “By encouraging particularly significant developments and significant developers to take the opportunity of pre-applications discussions with the department, that has significantly facilitated and made the actual delivery of planning decisions much more efficient and effective.”

Another key aspect is the improvement of consultee performance e.g. improving the quality and speed of the Northern Ireland Environment Agency’s responses to applications. Following the transfer to local government, each council will have a single point of contact for consultations and a new protocol for processing consultations will take effect.

The department has underlined the importance of staff engaging with applicants and being responsive to their queries. “Inevitably, in this process, there can at times be friction and sometimes a bit of tension,” he noted, “but sometimes it’s often down to a simple lack of communication or miscommunication.”

The final strand of its preparations for the transfer was capacity-building and training for new councillors and council officers. Formal training started in September and is structured around four separate sessions: an overview of the planning system; development plans and working with the community; community planning; and the propriety and outcomes of planning decisions.

O’Reilly remarked that a sound understanding of the new system and the processes associated with making planning decisions will help councillors to undertake their new role.

A substantial amount of subordinate legislation – following on from the Planning Act and Local Government Act – is being processed. The precise definitions of local, major and regionally significant applications are being finalised. The Department of the Environment will only become involved in regionally significant cases.

Planning managers have now been appointed for each of the 11 new councils and the ‘pathfinder project’ in the Newry, Mourne and Down District Council area is testing how the post-transfer arrangements operate. The formal legal responsibility still rests with the department but the intention is to “make it seem exactly as if it’s working in the council just to iron out any final problems that may come to light.”

The mandatory code of conduct for councillors was published in May 2014 and replaces the previous voluntary code, which had been in place since 1992. New departmental guidance – to prioritise “critical pieces of work” – is being drafted with a view to taking effect on day one of the transfer. The IT system has been re-engineered and upgraded to provide a service to 11 separate authorities. The DoE is also looking at how its residual planning responsibilities will work, particularly in relation to planning policy, and how it can best provide guidance and support to councils after 1 April.

“My colleagues in the department are working flat out to seek to make this change happen,” O’Reilly added. “We’re very, very committed personally to making it happen because I think there’s no-one in the department who doesn’t believe this is the right thing to do. Inevitably, there will be some issues that will arise. There’ll be no doubt some issues of controversy in the future but again planning by its nature tends from time to time to give rise to issues of controversy.”