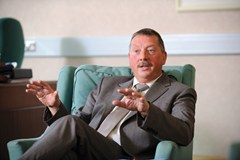 DUP criticism of fiscal devolution casts doubt on the prospects for devolving and cutting the corporate rate.

“Personally, I do not want to see the devolution of a huge amount of taxation to Northern Ireland for two reasons,” he responded.

Wilson continued by claiming that there are “very good economic reasons for not seeking that kind of devolution” i.e. the volatility of receipts. The devolution of “tax and tax-raising powers then lumbers Northern Ireland with all of the uncertainty in that tax revenue” and he warned: “If things go badly, we suffer from the reduction in tax revenues, and to try and plan any kind of public spending programme with that kind of uncertainty built in would make life very, very difficult.”

The Minister concluded: “And that’s one of the reasons why it is important, I believe, not to have that uncertainty built in through the massive devolution of the whole range of taxes to Northern Ireland.”

Simon Hamilton is due to succeed Sammy Wilson as Finance Minister in 2013. The main UK corporation tax rate is 26 per cent (20 per cent for SMEs), compared to 12.5 per cent in the Republic.

All five Executive parties have stated their public support for devolving and cutting the rate, proposed by Secretary of State Owen Paterson. He is keen to transfer the power but the request must be made by the Assembly.

Supporters accept that the block grant must be cut to pay for lower corporation tax, under the European Court of Justice’s Azores judgment. The DUP’s Assembly manifesto states: “Our goal is not [to] be as competitive as the Irish Republic, but to be more competitive, so we would work towards a 10% rate.”

Speaking afterwards, Maskey stated: “How can anyone have any confidence in Sammy Wilson to deliver a reduction in corporation tax or any other powers when this is his position?”

A DUP spokesman said that Wilson was criticising “the devolution of a wide range of tax powers” and claimed that Sinn Féin’s economic policy “rarely stretches beyond simply calling for an all-Ireland approach”. The spokesman added that the DUP “fully supports the devolution of corporation tax to Northern Ireland” but it was important that revenues increased to compensate for the cut in the block grant.

Two days later, Hamilton told the BBC’s Hearts and Minds programmes that the DUP was “not afraid of financial independence per se” and was “continuing to actively pursue the devolution of corporation tax powers”.