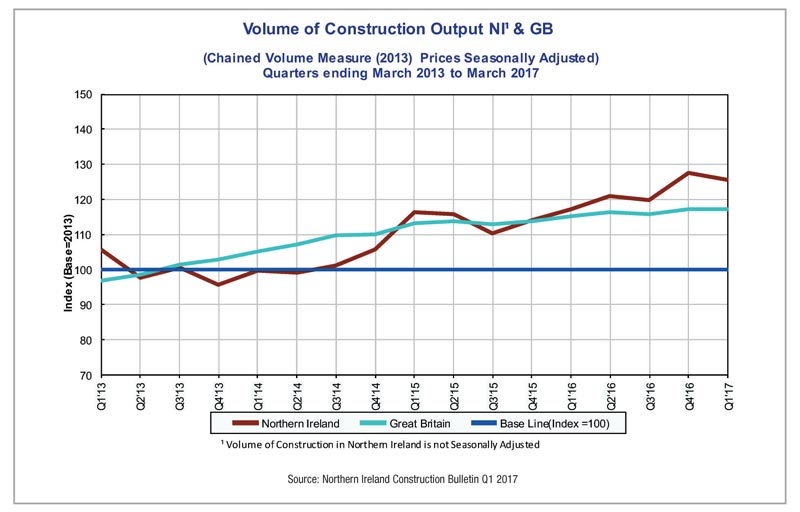 A key indicator of the performance of Northern Ireland’s economy, agendaNi looks at the latest construction output for the first quarter of 2017.

Accounting for 6 per cent of GVA in Northern Ireland, the construction sector has been recognised as the most volatile to economic change. The sector was the first to experience a slowdown during the global financial crisis. From its peak in 2007, the sector experienced a downturn until the end of 2013 but has witnessed gradual improvement ever since.

The first quarter of 2017 witnessed a 1.7 per cent decrease in construction output from the previous quarter, however, this was against the trend which saw a 7.1 per cent increase when compared to the same quarter in 2016. In fact, the Q1 levels were the second highest reported in five years.

The overall decrease in Q1 can be attributed to a big fall in New Work (construction of any new housing or non-housing structure) which fell by 7.2 per cent. Although it was 10.2 per cent up than the same period the year before. Repair and Maintenance also decreased across the quarter (0.7 per cent) but similarly, was up 2.7 per cent on Q1 2016.

Within the sub-sectors of construction output (housing, infrastructure and other), other work was accounted for 42 per cent, housing was 33 per cent and infrastructure was 22 per cent.

Infrastructure work decreased by 20.7 per cent compared to the previous quarter and was down 1.2 per cent on the same quarter in 2016. The infrastructure input had spiked between Q3 2015 and Q4 2016 but by Q1 2017 had returned closely to Q1 2016 levels. The decreases were driven by falls in new private infrastructure and R&M infrastructure.

Despite falling by 5.6 per cent in Q1, construction output designated as other remains at one of the highest levels seen in the last eight years and is up 11.1 per cent when compared to Q1 in 2016.

While the construction sector appears to be on an upward trend, the decreases recorded between Q4 in 2016 and Q1 of 2017 could be cause for concern. However, given the volatility of the sector, a fair assessment of whether economic changes are impacting on the sector cannot be made until future statistics are analysed and compared.