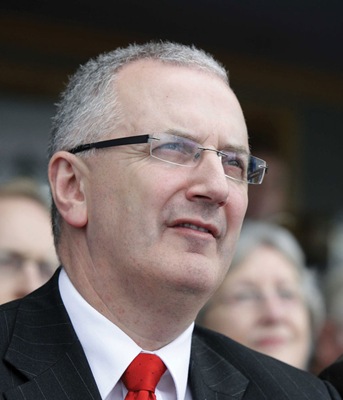 Ryan Jennings talks to OFMDFM Committee Chair Danny Kennedy on the intricacies of being a chairman and building a consensus.

Like the department, the central point of the OFMDFM Committee’s work, Danny Kennedy says, is the Programme for Government, or in its lesser-known guise, the “government manifesto”.

While his party of course are aspiring to greater things, Danny Kennedy believes that both his and the committee’s work is “critical” to the good working of government up on the hill. As a statutory committee, it has full scrutiny powers but he prefers instead to focus on its improvement work.

“We make recommendations to perhaps improve legislation or look at consultation documents – whereby improvements can be made,” he says.

“The trick of the role I have as Chair is to make sure the committee’s view is reflected fairly in terms of proposals that the department are making.” Each of the parties represented, he says, should feel like they have had an opportunity to have an input. From that point, the committee will seek to reach a consensus, both within itself and with the department.

That is not to say that a friendly agreement is always reached. Realistically, Kennedy concedes, “this is a coalition government and yes, political parties will have their differences,” but he points to the committee’s two recent reports into Europe and child poverty as proof that it can be done.

A cynic would say that it seems hard enough to achieve a consensus in the other two branches of government; the Assembly and Executive, so naturally the committee system is open to the same accusation. “Certainly I think we have to make efforts and I think politicians on my committee certainly make strenuous efforts to look at the critical issues from a point of view of bringing them forward,” Kennedy offers.

He again cites the committee’s work into Europe and child poverty. While, of course, most reasonable thinking people would like to see child poverty eradicated, Europe has proven to be more divisive in Northern Ireland, as well as over the water. The report is analysed in detail on page 120 and centres more on the ‘what we can do now from our position?’ than the ‘should we be in Europe?’ question. For example, its flagship recommendation is for an Assembly Brussels Officer to be appointed. That position would be set alongside the Executive’s standing presence there but also act separately, so “the left hand would know what the right hand is doing”.

Recommendations such as that, he continues, have had the “full support” of the committee and indeed he is keen to state the “positive nature” with which the members approach their work. Relations, he says, have “improved well”, to the extent that there is a good working relationship.

The report on child poverty produced 40 recommendations and, not surprisingly, a consensus on the committee. Kennedy is though, at pains to explain that the report goes much further than just agreeing that child poverty is a bad thing, focussing rather on practicalities such as “how best and how quickly to [alleviate and eradicate it].”

Standing slightly apart from the other 10 scrutiny committees, which generally have a fairly confined forward work programme, the committee mirrors the department’s cross-cutting remit.

That being the case, for him the committee plays a central role in government: “I see it as an advantage as [the committee can] highlight issues with other Assembly committees who then in turn raise those with their respective departments.”

He adds: “We’re not in the business of dictating terms to other committees or other departments. We’re in the business of trying to seek consensus to highlight where action is necessary.” That, he says, is the cross-cutting element of the committee.

One example of following that role can be seen in the committee’s recommendation in its report into child poverty to “encourage the Committee for Social Development to carefully monitor the delivery of the commitment investment strategy”.

On a wider note, although the committee system as a whole does and should, he stresses, have the power to keep the Executive accountable, there is no ‘threat’ involved in that as “it’s a clear democratic principle that the Executive should be available for scrutiny. It doesn’t necessarily have to be confrontational”.

The times when that is the case, he says, are not going to be often but he admits the nature of a coalition government, and in particular one in Northern Ireland means “every attempt” should be made to find consensus and conciliation.

Proof that the committee generally overcomes the traditional political divisions, he concludes, is the fact that the committee can bring forward reports. “Yes, members are coming from a different political basis and perhaps even different ideological stand points, but the important thing is that with agreement and debate you can produce a piece of work.” 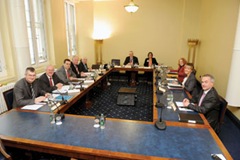 As Danny Kennedy stated, like every committee his has to take on board the political differences of its members.

The committee had several meetings on the Justice Bill – on 9 September, 7 October, 14 October and 21 October.

On occasion, it is fair to say that committees are not best placed to make amendments. Alex Attwood, for example, the most outspoken SDLP MLA on justice devolution, suggested an amendment to the committee to leave out the now famous ‘sunset clause’ in the Bill. Like much on the wider debate on devolving those powers, the committee vote divided along Sinn Féin/DUP and UUP/SDLP lines.

Tom Elliott proposed that the committee should seek legal advice on the potential consequences of the sunset clause. Again the committee voted along those party lines.

Attwood’s proposed amendment, of course, was debated in the Assembly but only because it was put forward in the SDLP guise. The committee did not put forward any amendment to the Bill.

In June 2008, the committee published its two-pronged report into child poverty.

Chief among the recommendations is that the department should quickly adopt the Lifetime Opportunities Strategy as the framework to counter both poverty and exclusion.

The committee said that would allow for a three to five year regional anti-poverty and social exclusion plan.

A ministerially led Poverty and Social Exclusion Forum was also mooted as well as establishing a regional children and young people’s action plan.

Junior Minister Gerry Kelly told the committee on 17 February that the Assembly had given legislative consent to the Westminster Child Poverty Bill which aims to eradicate the problem by 2020.

Child poverty figures for 2008 in Northern Ireland, the junior Minister said, were on a par with England, better than Wales and catching up with Scotland (currently ahead in the UK).