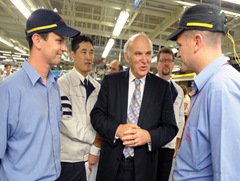 Reversing the over-importance placed on higher education is emerging as the coalition’s main theme as it gears its skills policy around the economic recovery.

Skills policy is a devolved matter except for some UK-wide bodies. When UK ministers use the word national, it therefore usually means English. To be truly national, an idea needs to be suggested by the UK Government and accepted by the Scottish, Welsh and Northern Ireland administrations.

During the election campaign William Hague said the Tories had learned from Reg Empey’s experience in government while they were in opposition.

Within the UK Department for Business, Innovation and Skills, the following ministers are most relevant to the sector:

Cable is a Liberal Democrat, while Hayes and Willetts are Tories. Of the four coalition commitments on skills and training, three draw on Conservative thinking.

The most ambitious of these, national citizen service, is part of Cameron’s drive for a ‘big society’ (agendaNi issue 38, page 82-83). This will initially help 16- year olds become “active and responsible citizens”, to mix with people from different backgrounds and get involved in their communities.

Work clubs are also proposed. These are places where unemployed people can gather to share skills, find jobs, make contacts and support each other.

Both parties generally agree on the fourth commitment, to “seek ways to support the creation of apprenticeships, internships, work pairings, and college and workplace training places”.

Cable has already voiced a strong commitment to lifelong learning and apprenticeships, which partly comes from his family’s background.

“A story from my own life makes the point,” he said in a keynote speech on 3 June. “My mother and father left school at 15 to work in factories. My father eventually taught building trades in the local technical college. We need more people like him.

“My mother was a housewife and when I was 10, she had a major nervous breakdown and spent time in a mental hospital. When she recovered, she saved her mind through adult education – learning for the first time about history, literature, philosophy and art. We need more people like her too.”

Cable’s priorities are an increased emphasis on lifelong learning and disposing of the “outdated value distinction” between ‘blue collar apprenticeships and further education’ on one hand and university on the other. Some of the bureaucracy in FE must also be stripped out.

While 250,000 apprenticeships sounds ample, the Business Secretary sees this as far too low a figure. He hopes to create another 50,000.

“Education and learning are, of course, desirable in their own right,” he added. “Education for education’s sake – learning how to learn – benefits the economy in the long term. Philistinism [i.e. undervaluing art or intellect] is bad economics. It is also fundamentally unacceptable.”

To Hayes, further and higher education are public services just like the NHS and police, but too many education quangos were created under New Labour.

His first priority is to replace bureaucracy with “genuine devolution of power” within the system. Secondly, waste and inefficiency must be eliminated e.g. £250 million from the Train to Gain programme was being spent on work which employers could have done themselves.

Thirdly, “education should be about people not just numbers” so it therefore should lead people towards “a better job or a more fulfilling life.”

Willetts has also criticised how previous governments have frequently changed the structure, content and titles of vocational qualifications. He is committed to keeping City and Guilds, BTECs, HNCs and HNDs, and wants apprenticeships seen as equal to A-levels.

He refers back to a visit to the large hadron collider when he was in opposition. He met “fantastic” particle physicists from the UK but few British technicians, the people who actually built the facility. Building a “technician class”, he has concluded, is crucial to the national interest.