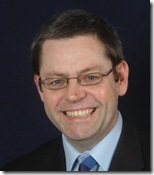 Is it me, or does the financial forecast seem like a weather forecast, with unsettled times for the foreseeable future?

I speak as a doctor and on behalf of doctors; we understand that a society’s greatest resource is its citizens and that their health matters. We regard an individual’s health and well being as an end in itself. It is after all our calling, vocation and indeed our raison d’être.

We are all facing hard times. Gordon Brown has finally admitted that spending cuts have to be made. There is an ongoing drive for efficiency savings, and the Northern Ireland Executive want spending cuts of £370 million by Christmas 2009.

Devolution of power has led to the emergence of divergent models of health services. Labour’s policy after devolution has been to allow the countries to follow their own priorities and policy direction in response to local needs. A likely change of government at Westminster will impact on Northern Ireland.

A new Conservative government will have a different approach, and despite reassurances that health issues will be dealt with locally, it remains unclear what influence the Conservative Party will have in Northern Ireland, especially in light of the link with the Ulster Unionist Party.

One certainty is that public expenditure cuts will occur after the next general election. There may well be a smaller share in the next budget allocated to health and social care.

To add to the pessimistic outlook, there are mounting calls to change the Barnett formula to something more transparent, having been deemed inequitable between the four countries. First Minister Peter Robinson recently stated that the Northern Ireland block grant would not be exempt from the cuts, which will have to be made by any future government.

Changes to the formula will likely reduce much needed income to Northern Ireland. In 2007-2008, Northern Ireland received £5,684 per head from Westminster via the block grant. This amount was 21 per cent above the UK average spend per head.

As if the situation wasn’t difficult enough, we find ourselves in the midst of a flu pandemic. Doctors in primary and secondary care have stepped up to the mark, and are working to administer a new vaccine programme as well as carrying out routine work. We were facing the possibility of funding cuts to front line services in order to meet the cost of tackling H1N1. So far this has been averted, but the whole episode starkly underlined the need for our MLAs to work in a co-ordinated fashion.

Health should never be a political football. To mangle the quotation from Bill Shankly, health is much more serious than that, it is a matter of life and death.

Health care systems work best when health professionals, those elected to formulate policy and those empowered to enforce such policy act in concert for the well-being of society. This is exactly what is needed to meet the oncoming financial squeeze. Doctors, through the BMA, want to continue to work constructively with the Minister for Health, departmental officials and other organisations concerned with health for the benefit of their patients.

It is only by working together that we will be able to weather this financial storm.

Finally take a look at that £20 Bank of England note in your pocket – I’ll assume that although times are hard you may just have one. That gentleman with the large nose is Adam Smith, author of ‘The Wealth of Nations’, the foundation of modern economic thought published in 1776. Smith, a moralist as much as an economist, acknowledged the importance of good health, saying: “What can be added to the happiness of a man who is in health, out of debt, and has a clear conscience?” And that is as good a note to end on as any other.

Dr Paul Darragh chairs the British Medical Association’s Northern Ireland Council and is an associate specialist in general medicine at the Mid-Ulster Hospital.