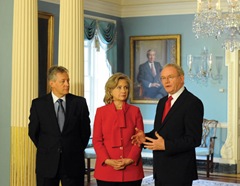 A strong economy will help secure lasting peace in Northern Ireland, according to Hillary Clinton at the US-NI Economic Conference.

Robinson said: “The Northern Ireland Executive is determined to deliver economic stability.” He also thanked Clinton for her work with Northern Ireland. “Madam Secretary, you were there at every stage. When others patted us on the back and said ‘good luck’, you stuck with us,” he said.

McGuinness told the conference that Northern Ireland offers opportunities ranging from wind turbine construction to software, from pharmaceuticals to mobile telecoms. “We are concentrating on building a knowledge-based economy. And we’re encouraging businesses to invest more in R&D,” he said.

The conference followed up on many of the efforts Clinton made when she visited Belfast in October last year. Her husband, Bill, also visited Northern Ireland last month to help prepare for the conference.

Clinton informed delegates that “for a long time when Americans and particularly American businesses heard the words ‘Northern Ireland’ the first thing that came to mind was not investment”.

However, she said pointed to previous investment and said that more US companies are now hoping to invest in Northern Ireland.

However, she recognised that while violence is largely in the past “dissidents continue to exploit every chance they get to influence in those hard-to-reach communities where peace is most fragile.”

“We need to prove in republican and loyalist communities alike that peace pays off, that means working to bring opportunity to all or Northern Ireland. We have to increase the credibility of power-sharing government and maintain momentum behind the peace process,” she added.

However, with the unemployment rate in Northern Ireland currently standing at 58,300 it is hoped more investment from the US will follow.