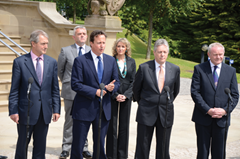 MLAs must deliver on a shared future and cannot keep coming to London for money, David Cameron stated as he returned to Stormont. Peter Cheney analyses the message.

David Cameron’s six hours in Northern Ireland were filled by meetings with ministers, an address to the Assembly and an impromptu walkabout on Irvinestown’s main street.

Essentially, his main message was that MLAs must get on with governing Northern Ireland and help to deliver two results: a revived economy and a “genuinely shared future, not a shared out future”. If political structures do not deliver, he told the Assembly, they lose popular support – a clear reference to the falling turnout in consecutive elections.

Sectarian divisions “help to sustain terrorism” and tackling the problem was “mainly in your hands”. Cameron made it clear that “we cannot have a future in which everything in Northern Ireland is shared out on sectarian grounds.”

The UK Government would take responsibility for its own past wrongs, as shown in the Bloody Sunday apology, but he also placed the onus on paramilitaries:

“Others too must think about how to face up to their part in the mistakes and tragedies of the past.”

Cameron confirmed that his pledge of “no more costly and open-ended inquiries into the past” did not rule out any public inquiries, but his general direction was to “face forwards” rather than “endlessly examining events from before.”

Reforming Stormont was up to the local parties but he favoured a formal opposition and quoted Bertie Ahern’s support for that.

The Prime Minister openly expressed his unionism while several Sinn Féin members looked on uncomfortably. People “from Coleraine or Cardiff” wanted work, safe streets and a stable home life. Northern Ireland’s economic advantages, he claimed, included being part of a UK economy which would clear its structural deficit by 2015.

As before, he spoke warmly of visiting Northern Ireland. Conservative sources have consistently described his commitment as sincere although political opponents see it as political manoeuvring.

Dependence on the state had replaced manufacturing success and this “had to change” because of the deficit. What Cameron did not mention here was his ideological desire for less government all round, regardless of the economic conditions. Northern Ireland’s resource budget (down 6.9 per cent on Treasury figures) was slightly better off than the UK average (8.3 per cent), but the larger capital spending cuts (37-40 per cent) went unnoticed in the address.

Pointedly, he reminded Stormont’s politicians that “the days are over when the answer to every problem is simply to ask the Treasury for more money.”

Positive noises were made on corporation tax, a specific commitment not being possible due to the ongoing consultation. He said he understood the “strength of feeling within the main business organisations … and across all political parties”. It is true that all main political parties support the move but the Greens and TUV object.

Cameron’s wider political calculation will be whether that would set a precedent for Scotland and encourage separatism there. That would obviously also lessen Northern Ireland’s competitive advantage. Alex Salmond has stated: “We shall demand that corporation tax be devolved; the logic of that is irresistible. If Northern Ireland is fit to control its own corporation tax rate, then so are we.”

Opposing terrorism was a joint effort. He repeated his condemnation of Constable Ronan Kerr’s murder and highlighted the extra counter-terrorism funding (up to £245 million) from Westminster. Towards his conclusion, Cameron promised to “work with all parties and all parts of the community” with the Downing Street door being open “when circumstances require it.” So far, that has meant two joint meetings involving the first ministers from Scotland, Wales and Northern Ireland. 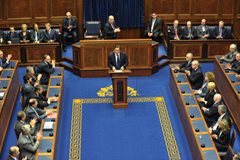 Cameron’s talks with Peter Robinson and Martin McGuinness earlier focused on social and economic issues, including a shared future, health, education and economic growth. Public finance had been discussed in London on the previous day, including the Executive’s claim for £316 million from end-of-year funds.

Speaking to the press afterwards, he said he hoped to be judged on his promises to Northern Ireland not just how often he visited it. Rebalancing the economy, he remarked, would also involve action on apprenticeships, house-building and planning reform, not just corporation tax. The work of the PSNI’s Historical Enquiries Team was praised as “vitally important” and he stressed that the main focus should be on establishing the truth about the past.

The PM also held two brief meetings with the Executive and party leaders. Each Minister raised issues where there was an overlap with Westminster. Peter Robinson was not looking for a “begging bowl” but hoped that, in the long term, Northern Ireland would not be “reliant at all” on the Exchequer. Martin McGuinness was pleased with a pledge that the UK Government would stand over the St Andrews capital funding.

Sinn Féin and the SDLP both raised the Government’s approach to the past, with Margaret Ritchie calling on the governments to draw up a “proper and sensitive way” to deal with it. Gerry Adams restated his party’s call for a truth commission. With paramilitaries in mind, Peter Robinson replied that some people would approach the past “with less candour than others”.

David Ford welcomed the PM’s emphasis on a shared future, as did the UUP’s Mike Nesbitt. The phrase “shared out future” was previously used by the Ulster Unionists.

This was Cameron’s first visit since 20 May last year. As he said in the chamber, his return coincided with the feast day of St Columba (Colum Cille), whose monks produced the Irish Book of Kells and the English Lindisfarne Gospels. St Columba is depicted along with St Patrick in Westminster’s Central Lobby, where he is seen to represent Northern Ireland.

Assembly protocol stopped David Cameron from taking questions from MLAs. Jim Allister had claimed that Downing Street had offered to take questions after the address. Number 10 confirmed that this was “raised as a possibility” and added: “The Prime Minister would have been very happy to do so.”

However, his staff were “guided by the Speaker’s office on protocol”. An Assembly spokeswoman explained that the speech “followed the established format and protocol used for similar visits by Gordon Brown and Hillary Clinton in the past.”