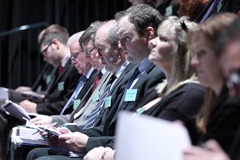 The economic downturn had a major impact on business travel but visitor numbers are clearly picking up again.

Business tourism provides facilities and services to delegates attending conferences and other events, stopping off in a city on transit, or enjoying corporate hospitality. The UK’s Business Tourism Partnership has identified the sector as being resilient, sustainable and complementing leisure tourism and resulting in more job creation (due to the higher quality of personal service required).

Northern Ireland was firmly placed on the business tourism map last year when Belfast was named as the best UK destination at the 2013 Conference and Incentive Travel Awards. Recent investment had “radically changed” the city’s landscape. Its world-class tourist attractions and iconic buildings created “a vibrant and happening city that will stir the imagination and appeal to a wide range of delegates.”

Belfast City Council’s tourism monitor estimated that 583,000 business visitors stayed in the city in 2012. The Executive’s annual tourism statistics for 2012 indicate that a lower number of business tourists across the whole province (393,000) but this was followed by a 20 per cent increase to 471,000 in the following year.

The tourism monitor’s findings are based on face-to-face interviews with 152 business visitors. Within this group, 77 per cent came from Great Britain, 8 per cent each from the Republic of Ireland and continental Europe, and 5 per cent from elsewhere. Almost seven out of ten (68 per cent) business travellers visited Belfast at least once a year.

When in Belfast, 73 per cent of overnight business visitors ate in a venue outside their hotel but a much smaller share went to a tourist attraction (12 per cent) or went shopping (9 per cent). The group is therefore less visible than holiday-makers or those visiting friends and relatives.

More than half of their spending (55 per cent) is on accommodation with the next largest amount (21 per cent) being on food and drink. Four out of five out-of-state visitors would consider coming back for a leisure break, with women more likely to return than men.

The extension at Belfast Waterfront will enhance the city’s ability to attract larger conferences and events by doubling the size of its facilities over the next two years. National and international conferences for 2016 and later year have already been booked. ‘Conference wins’ for the city have increased by 131 per cent over the last three years and, following the growth, the Waterfront expansion will help to secure more business and boost tourism and hospitality in general.