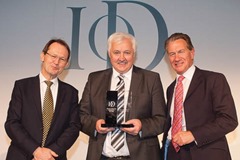 Bryson Group Chief Executive John McMullan has paid tribute to the work of his organisation after receiving the UK Public/Third Sector Director of the Year award from the Institute of Directors.

He remarked: “Receiving the award for UK Public/Third Sector Director of the Year has been humbling but is a fantastic recognition, not just for me personally but more importantly, for the staff and volunteers in Bryson and of the important social and economic impact of social enterprise in the UK.

“These awards provide encouragement for third sector and social enterprise leaders to become members of the IoD, engage in cross-sectoral business networks and invest in their own professional development through IoD programmes.”

The Institute of Directors’ Northern Ireland Divisional Director, Linda Brown, added: “The judges believed that John has demonstrated clear leadership and financial performance and growth, as well as a high degree of employee and community engagement.”

The IoD in Northern Ireland has welcomed the growth of social enterprises provided that economic development funding does not subsidise charitable activity but instead promotes entrepreneurship.