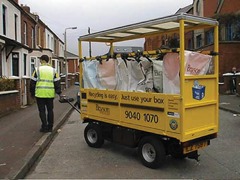 Northern Ireland’s largest social enterprise has been delivering for the environment for 2 decades.

With humble beginnings 20 years ago, Bryson began its first recycling project, ‘Cash for Cans’, and now Bryson Recycling is the UK’s largest social enterprise provider of recycling services. It is currently processing up to 60 per cent of all recyclable materials collected at the kerbside in Northern Ireland.

Eric Randal, Director of Bryson Recycling, who was one of the first employees, commented on the changes and future of recycling:

“Twenty years ago recycling was seen as something very strange to do by the majority of people but we at Bryson were committed to making this work as we could see how we needed to protect our environment. With changes to legislation, pressure from Europe and a realisation that we have to be more environmentally aware, it is now a normal activity that has resulted in the lowest ever amount of municipal waste being sent to landfill in the last DoE report. In the last year we alone have recycled almost 45,000 tonnes of materials from homes across Northern Ireland, which 20 years ago would have ended up in landfill.

“We believe the future of recycling needs to focus on the quality of the materials collected at source. Through our social enterprise model we have perfected a way of collecting materials at the kerbside that ensures they are of the highest possible quality and increases the quantity collected. These materials are then transformed into new products and this is where the value is added in economic terms; re-manufacturing products is worth ten times more to the local economy than value derived from carrying out the collection process.

“The quality of output materials should be the foundation on which we rebuild our recycling collection infrastructure.” 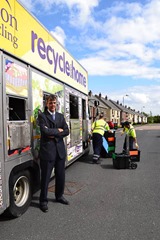 Over the last year, Bryson has been very busy retendering for existing contracts and also expanding our recycling services beyond Northern Ireland. Our social enterprise has grown in the last 12 months and has moved into the Republic of Ireland market, managing the recycling amenity sites throughout County Donegal. We have also announced a new four-year recycling contract worth £2.4 million in Wales. The new contract is with Conwy County Borough Council which recently topped the national recycling league table for Wales.

We will have 35 new Kerb-Sort vehicles out on the roads of Northern Ireland by the end of this year and we are currently trialing our new wheelie-box across 5,000 homes (pictured above). We have invested in staff resources and are now actively seeking opportunities for waste and recycling contracts across England, Scotland and Wales following on from the success we have had in Northern Ireland and Ireland.

Check out our latest video on www.brysonrecycling.org 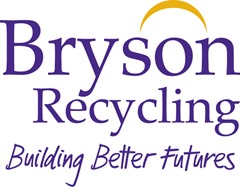